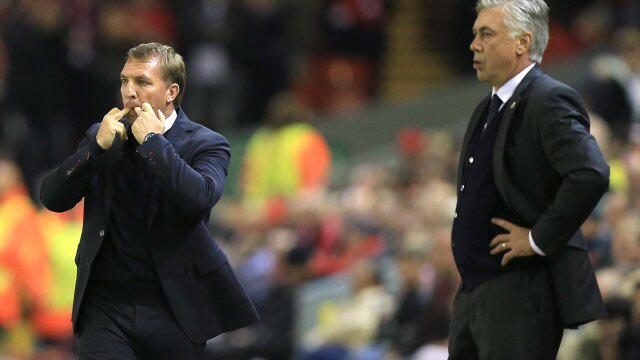 Liverpool have opened talks with Carlo Ancelotti about the possibility of taking over the Anfield hot-seat from under-fire boss Brendan Rodgers, according to the Daily Mail.

The Northern Irishman’s position has come under increasing pressure after a disappointing start to the season with just two wins from their opening six games leaving the Reds down in 13th place in the Premier League table.

A shock 3-0 home defeat to West Ham was followed by a 3-1 loss at Manchester United and the Daily Mail claim it was these back-to-back losses that prompted Liverpool owners FSG to start considering alternative managers.

Rodgers had the perfect opportunity to give himself some breathing room with a home tie against Norwich City on Sunday but the beleaguered boss looked on as the Canaries left Anfield with a hard fought 1-1 draw to pile further pressure on his shoulders.

It looks like that disappointing result has led to FSG making their move for potential replacements as the Daily Mail are reporting today that the American owners have now made contact with Carlo Ancelotti about taking over from Rodgers.

The Italian coach has immense pedigree in the game and won the double during his time at Chelsea between 2009-2011 before being fired by the trigger-happy Roman Abramovich, so he knows what it takes to win here in England.

However, the 56-year-old is currently a free agent after being fired by Real Madrid in the summer despite leading them to their tenth European Cup in 2014 and he’s currently spending time between his homes in London and Vancouver.

Ancelotti is therefore available to start work immediately if Liverpool decided to sack Rodgers but the Italian may need some convincing that it would be the right project for him, as he usually prefers to take over teams that are at their peak and not a ‘work in progress’.

The newspaper report suggests that Rodgers still has the support of some key decision makers at Anfield and he could buy himself some time with a comfortable win over Carlisle in the Capital One Cup tonight, but it looks like his position is hanging by a thread.

Another disappointing defeat over the coming weeks could spell the end for the former Swansea boss and it looks as though FSG have made Ancelotti their prime target to replace him.

After facing Carlisle tonight, Liverpool have back-to-back home games against Aston Villa and FC Sion before facing tricky trips to Everton and Tottenham, so I have a feeling the coming weeks are going to prove pivotal.

If Rodgers can survive past the game at White Hart Lane on October 17, he may well have done enough to retain the trust of the owners but if results don’t go their way, then I fully expect a change of management at Anfield.