Man Utd take on Ipswich at Old Trafford this evening. Here’s a preview with team news, likely line-ups, betting and predicted score for the game.

Manchester United will be looking to avoid an upset when they take on Ipswich in the 3rd round of the Capital One Cup at Old Trafford tonight.

United know only too well the danger of playing lower league opposition in the League Cup after being humiliated 4-0 by MK Dons at this stage last season.

However, the squad is in far better shape this time around following another summer of heavy investment and Louis van Gaal will be confident his side have learned their lesson.

The Red Devils come into the game in fine form with their 3-2 victory over Southampton at St Mary’s on Sunday seeing them move up to second in the Premier League table.

Ipswich should be no pushovers though as Mike McCarthy’s side are in decent form themselves, with the Tractor Boys sitting fourth in the Championship table while they booked their place in the 3rd round of the cup with a 4-1 win over Doncaster.

van Gaal is expected to make some changes to his starting eleven with Sergio Romero coming in for David De Gea in goal.

Antonio Valencia is also likely to replace Matteo Darmian at right-back while Ashley Young could fill-in on the left with Luke Shaw and Marcos Rojo injured.

Paddy McNair is also unavailable while van Gaal has confirmed Phil Jones will be on the bench so Chris Smalling and Daley Blind should keep their places at the back.

Youngster Andreas Pereira could get a chance to impress while Bastian Schweinsteiger, Ander Herrera and Marouane Fellaini are also pushing for starts after being left out against Southampton. 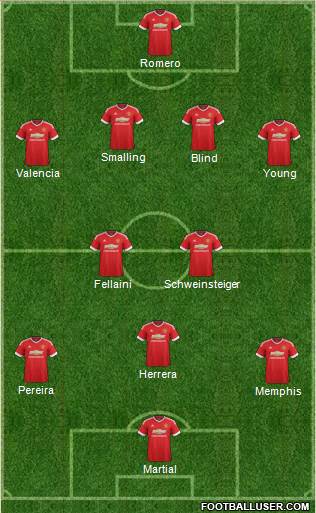 Man Utd 3-1 Ipswich: I don’t expect this to be a walk over and Ipswich should cause United a few problems but I suspect the hosts will ease to victory in the end.

United are the 1/4 favourites to win the game but Football-Talk can get new customers enhanced odds of 4/1 on a home win. My prediction of 3-1 is available at odds of 10/1, while I also like the look of Memphis Depay to open the scoring at odds of 9/2. If we combine those two bets in a score-cast, then we get very tempting odds of 28/1.