Manchester City will look to extend their lead at the top of the table when they take on Tottenham on Saturday. Here is our predicted City line-up.

Manchester City will look to extend their lead at the top of the Premier League when they take on Tottenham at White Hart Lane on Saturday.  Here is the starting eleven I think Manuel Pellegrini will go with for the game:

Goalkeeper: Joe Hart is set to return between the sticks after being rested in midweek.

Defence: Pellegrini is expected to be handed a major boost with Vincent Kompany set to return from a calf injury and he could join Nicolas Otamendi in the middle of defence.

Pablo Zabaleta remains sidelined through injury so Bacary Sagna is likely to continue at right-back while Alexander Kolarov will start at left-back with Gael Clichy also out.

Midfield: Fabian Delph remains out with a hamstring injury so Fernandiho is set to join Yaya Toure in midfield with Fernando dropping back to the bench after his run-out in midweek.

Attack: David Silva looks set to hand City a major boost by returning from a calf injury and he should join summer signings Kevin De Bruyne and Raheem Sterling in attack.

Samir Nasri may also be back in contention after a minor knock but he may have to make do with a place on the bench. Sergio Aguero is fit and should lead the line up front. 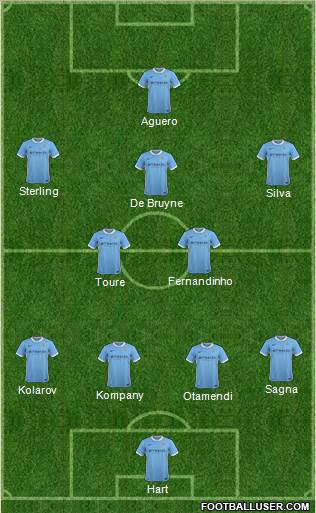