Man Utd will look to get back to winning ways when they take on Middlesbrough in the Capital One Cup on Wednesday night. Here is our predicted line-up

Man Utd will look to get back to winning ways when they take on Middlesbrough in the fourth round of the Capital One Cup on Wednesday night.  Here is the side I think Louis van Gaal will pick:

Goalkeeper: van Gaal may be tempted to hand Sergio Romero a start in goal and give David de Gea a rest but I think we’ll see the Spaniard keep his place.

Defence: The Dutch boss could make a couple of changes at the back with Matteo Darmian likely to come in for Antonio Valencia while Daley Blind should start having lost his place in recent weeks.

However, Chris Smalling and Phil Jones could be given another opportunity to develop their partnership at the back having impressed against Manchester City last time out.

Midfield: Michael Carrick is almost certain to come back in to the starting eleven while Marouane Fellaini could join the England international in midfield. This would give van Gaal the opportunity to rest Morgan Schneiderlin and Bastian Schweinsteiger.

Ander Herrera has forced his way back in to van Gaal’s first team plans in recent weeks and we could see the Spaniard retain his place in an attacking midfield position tomorrow night.

Attack: Memphis Depay has lost his in United’s starting eleven so he could be given a chance to stake his claim for a regular spot against Boro while youngster Jesse Lingard is being tipped to make a rare start in attack having impressed off the bench recently.

Many are calling for Wayne Rooney to be dropped after another disappointing performance at the weekend but I have a feeling we’ll see the captain once again start up front. van Gaal will be hoping this game is a good opportunity for Rooney to get among the goals and boost his confidence. 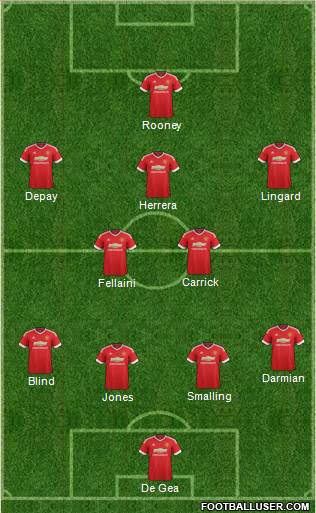