Manchester United have been handed a major injury boost with the club confident that Michael Carrick’s injury is not as bad as first feared. 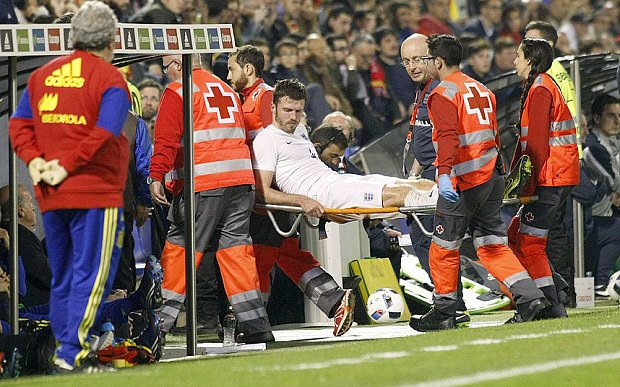 Manchester United have been handed a major injury boost with the club confident that Michael Carrick’s injury is not as bad as first feared, according to the Telegraph.

Carrick was forced off on a stretcher during England’s 2-0 friendly defeat to Spain in Alicante last Friday night after twisting his right ankle during the closing stages of the match.

It appeared the 34-year-old was facing an extended spell on the sidelines after Three Lions boss Roy Hodgson said immediately after the game that it looked like Carrick had suffered ankle ligament damage.

However, the Telegraph claim that United’s medical team have now undertaken an initial examination of the ankle at the clubs Carrington training base and have told Carrick the injury is not as serious as first thought.

The newspaper says further tests will be carried out before the full extent of the injury is known and Carrick is still expected to miss at least two games, but the midfielder could be back playing again before the end of the month.

If that time-scale proves to be accurate then Carrick will sit out the upcoming trip to Watford and the Champions League clash with PSV Eindhoven but he could be back in contention for the visit to the King Power to play Leicester City on November 28th.

The news will come as a welcome relief to Louis van Gaal as despite not always being a regular ahead of Bastian Schweinsteiger and Morgan Schneiderlin, Carrick is still an important player for United and has featured in 13 of their 20 games so far this season.

To lose the experienced England international for a prolonged period would have been a real blow and would have left van Gaal with little option but to start Schweinsteiger and Schneiderlin in the majority of matches over the festive period which could have led to further injury concerns.

We’ll have to wait for more news regarding the official diagnosis but hopefully Carrick will be back available again for the Leicester game or failing that, the visit of West Ham to Old Trafford on December 5th.