Louis van Gaal has played down the injury suffered by Marcos Rojo during Sunday’s 3-2 win over Arsenal plus we’ve got the latest on Wayne Rooney’s injury. 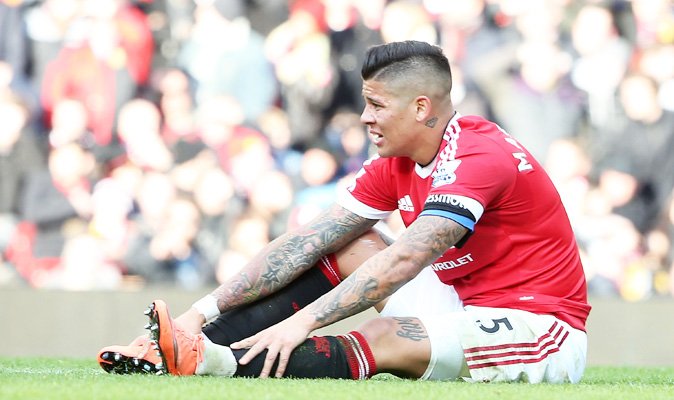 Manchester United appear to have been handed a boost with Louis van Gaal playing down the injury suffered by Marcos Rojo during Sunday’s 3-2 win over Arsenal.

The Argentinean international made his first start in three months against the Gunners yesterday after finally overcoming a shoulder injury that required surgery back in November.

However, after getting a solid first half under his belt, the 25-year-old was forced off shortly after the break after suffering an ankle injury during a challenge with Danny Welbeck on the touchline.

With Rojo limping off in the 55th minute, fans were left fearing that the club had suffered yet another cruel injury blow. However, van Gaal has moved to play down the injury by insisting it’s nothing serious and revealed he had planned to substitute the defender after 60 minutes anyway.

Speaking to ManUtd.com, when asked for an update on Rojo, van Gaal said:

“I don’t think it is serious; it was a kick. We have to wait and see, of course. It was also a good position that I gave him the first minutes to play. My plan was already 60 minutes. He didn’t reach the 60 minutes because of the kick.”

No doubt Rojo will be further assessed by the United medical team today but van Gaal will be hoping it does turn out to be nothing serious as another injured defender is the last thing the Dutchman needs right now.

Defence isn’t the only area where United are suffering right now as Anthony Martial, Bastian Schweinsteiger and Marouane Fellaini are also on the treatment table while it looks like van Gaal will have to make do without Wayne Rooney for a little while longer, too.

The United skipper has been nursing a knee injury in recent weeks and the striker was seen wearing a protective brace while sitting in the stands at Old Trafford on Sunday afternoon.

According to the Mirror, Rooney is due to have another scan on the knee to assess whether the injury is healing properly but has been instructed to keep the brace on for at least two more weeks.

With the brace now not due to be removed until mid-March, Rooney is unlikely to be back playing for United until early April, and that’s as long as he doesn’t suffer any setbacks over the next month.

This news will be a big blow to United but with Anthony Martial also missing the last two games with a hamstring problem, youngster Marcus Rashford has taken his chance with four goals in four days, so at least there is some positives to come out of United’s injury crisis.