Arsenal take on Sunderland at the Stadium of Light on Saturday lunchtime. Here is the side Gooner Mac thinks Arsene Wenger will select for the game:

The Gunners head in to the weekend action off the back of an impressive 13-game unbeaten run so are understandably the 2/5 favourites to secure another win at Sunderland. Betting on this game won’t be easy as the Black Cats can be a tough side at home but I still fancy Arsenal to edge it. However, if you do place a bet make sure you do it at a reputable betting site and it would be worth checking out a Winner bookie review before spending your hard earned money.

Arsene Wenger is set to ring the changes following the midweek win over Reading so here is the side I think the boss will select for the game:

Goalkeeper: Emi Martinez played in the EFL Cup win over Reading in midweek but Petr Cech is expected to be recalled after being rested last time out.

Defence: Wenger is expected to ring the changes after fielding a weakened side for the League Cup win so Shkodran Mustafi and Laurent Koscielny should come back in to the middle of defence with Rob Holding and Gabriel dropping out.

Carl Jenkinson made his first start since recovering from a serious knee injury but the lovable full-back with make way for Hector Bellerin on Saturday while Nacho Monreal is likely to come back in for Kieran Gibbs at left-back.

Midfield: Santi Cazorla remains a doubt after missing the last two games with an achilles injury while Granit Xhaka continues to serve his three-match suspension but Aaron Ramsey could return to the squad after finally overcoming a hamstring problem.

However, having been out for over two months, I don’t expect the Welshman to start at Sunderland so Francis Coquelin is likely to come in alongside Mohamed Elneny this weekend.

Attack: Lucas Perez has been ruled out for up to six weeks after suffering an ankle injury against Reading but Olivier Giroud is back in the reckoning after making his return off the bench in midweek.

The Frenchman looked a little rusty after being out for nearly seven weeks with a toe injury that he suffered against Paris Saint-Germain so I don’t think he’ll start on Saturday meaning Alexis Sanchez should come back in up front.

Theo Walcott should also get a recall along with Mesut Ozil after the pair were rested in midweek but it will be interesting to see who starts on the left wing. Alex Iwobi has been first choice so far this season but Alex Oxlade-Chamberlain is being tipped to keep his place in attack after netting both goals against Reading. 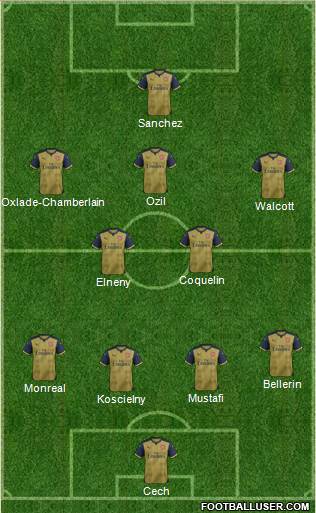