Liverpool take on Southampton in their EFL Cup semi-final first leg at St Marys on Wednesday night. Here is the side I think Jurgen Klopp will select:

Liverpool will be looking to take control of the tie when they take on Southampton in their EFL Cup semi-final first leg at St Marys on Wednesday night. Here is the side I think Jurgen Klopp will select for the game:

Goalkeeper: The Reds boss confirmed at his pre-match press conference that Loris Karius is likely to keep his place between the sticks after keeping a clean sheet during Sunday’s 0-0 draw with Plymouth. That means Simon Mignolet will have to make do with a place on the bench.

Defence: Klopp also revealed that he’ll name his strongest side for the game so we should see wholesale changes at the back with Nathaniel Clyne, Dejan Lovren and Ragnar Klavan all returning and Trent Alexander-Arnold, Lucas Leiva and Joe Gomez dropping out.

James Milner has also been passed fit to return at left-back after recovering from a minor calf injury while Joel Matip is back in full training after overcoming an ankle complaint – although this game will come too soon for the Cameroon star.

Midfield: Jordan Henderson is also edging closer to making his comeback following a heel injury but Klopp won’t rush his skipper back and will give him more time to recover for Sunday’s huge clash with Manchester United.

Emre Can is expected to retain his place in midfield after starting against Plymouth at the weekend but Gini Wijnaldum and Adam Lallana should get recalls with Kevin Stewart and Ovie Ejaria dropping out.

Attack: Philippe Coutinho is set to return to the squad after finally recovering from ankle ligament damage which has kept him on the sidelines since late November. The Brazilian international should be on the bench but will hope to get at least 20 minutes under his belt ahead of the United game.

That means we should see Divock Origi keeping his place in attack while Daniel Sturridge is expected to start but it remains to be seen which player will play through the middle and which will be deployed out wide.

Sadio Mane is off preparing for the Africa Cup of Nations so Roberto Firmino will play out on the wing with the likes of Sheyi Ojo and Ben Woodburn dropping out. 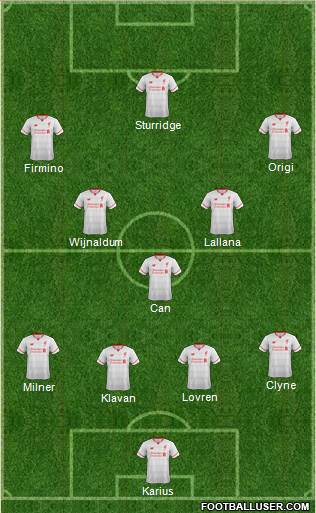