Liverpool will be looking to turn things around when they play Southampton in their EFL Cup semi final. Here is the side I think Jurgen Klopp will select

Liverpool will be looking to turn things around when they entertain Southampton in the second leg of their EFL Cup semi final tie on Wednesday night. Here is the side I think Jurgen Klopp will select for the game:

Goalkeeper: The Reds boss is expected to recall Loris Karius as the German youngster started in the first leg and kept Liverpool in the tie with some fine saves so Simon Mignolet should make way tomorrow night.

Defence: Nathaniel Clyne missed full training on Monday as a precaution and the right-back is expected to feature tomorrow while James Milner will once again keep his place ahead of Alberto Moreno at left-back.

Klopp isn’t expected to make too many changes despite the team shipping three goals against Swansea last time out so Dejan Lovren should keep his place at the back but Joel Matip is set to make his long-awaited return.

The centre-back has finally been cleared by FIFA to play following a dispute with the Cameroon FA so Ragnar Klavan is expected to make way against Southampton.

Midfield: Klopp confirmed earlier this week that Jordan Henderson is still feeling discomfort in his heel but the pain is manageable so the skipper is expected to start this crucial cup semi final.

Adam Lallana hasn’t been as influential playing out wide recently so with Liverpool needing to get themselves back in the tie with goals, I think we’ll see the England international moved back in to the middle of midfield.

Gini Wijnaldum is favourite to start alongside Henderson and Lallana with Emre Can the man to miss out after some questionable performances of late.

Attack: Philippe Coutinho sat out training on Monday but it was just precautionary as the Brazilian continues to work his way back to full fitness following an ankle ligament injury so he’s expected to start tomorrow.

Roberto Firmino is set to retain his place through the middle after scoring a brace at the weekend and with Lallana off the wing we could see Daniel Sturridge recalled to start from the right side of attack.

Divock Origi is also pushing for a start but I think Klopp will go with Sturridge in the absence of Sadio Mane – who’s still away at the African Cup of Nations. 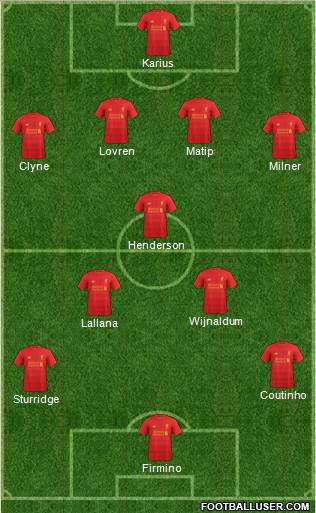