Manchester United take on Manchester City at the Etihad Stadium tomorrow night. Here is the team I think Jose Mourinho will pick for the game:

Manchester United will look to continue their push for the top four when they take on Manchester City at the Etihad Stadium tomorrow night.

Goalkeeper: David De Gea was back between the sticks for United’s Premier League win at Burnley on Sunday after being left out of the Europa League quarter final last week. The Spaniard is United’s number one and he will almost certainly keep his place tomorrow night, despite question marks surrounding his long-term future at the club.

Defence: Mourinho has problems at the back as Phil Jones and Chris Smalling have failed to recover from their toe and knee injuries while Marcos Rojo has been ruled out for several months with a serious knee ligament injury.

Therefore, Mourinho has little option but to stick with Daley Blind alongside Eric Bailly in the middle of defence while Matteo Darmian is likely to keep his place at left-back ahead of Luke Shaw.

Antonio Valencia is ready to return to the starting eleven after missing the Burnley win so Ashley Young will drop out.

Midfield: United have been dealt a major blow with the news that Paul Pogba will miss the game after picking up a muscle problem at Turf Moor on Sunday afternoon.

Michael Carrick is expected to get a recall while Marouane Fellaini could also start but the good news is that Ander Herrera has been declared fit despite picking up a minor ankle problem at the weekend.

Attack: Marcus Rashford is set for a recall to the starting eleven after being rested at Burnley and the youngster will lead the line up front in the absence of Zlatan Ibrahimovic – who won’t play again this season after suffering a serious knee injury.

Anthony Martial could keep his place in attack after a goal-scoring display last time out while Henrikh Mkhitaryan may come back in to the side in place of Jesse Lingard.

Wayne Rooney may drop to the bench despite getting on the score-sheet during the win at Burnley but Juan Mata is unlikely to play again this season after groin surgery. 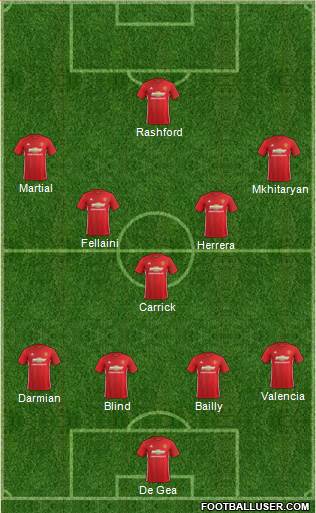