Tottenham take on Barnsley at Wembley in the Carabao Cup this evening. Here is a preview with team news, line-ups, betting tips and predicted score

Tottenham will look to book their place in the fourth round of the Carabao Cup when they take on Barnsley at Wembley this evening.

Mauricio Pochettino has made it clear the League Cup isn’t a top priority as he feels Spurs should focus on challenging for the Premier League and Champions League.

However, the north Londoners haven’t won a trophy since lifting the League Cup in 2008 so I’m sure the fans would like to see the club have a good go at winning any form of silverware this season.

Tottenham come in to the game after being held to a frustrating 0-0 draw by Swansea at the weekend so Pochettino will be hoping to get back to winning ways against their Championship opposition tonight.

Pochettino has confirmed he’ll make plenty of changes for the game so Michel Vorm is expected to start in goal with Hugo Lloris given a well-earned rest.

Summer signing Juan Foyth is likely to be handed his full debut while Harry Winks, Tashan Oakley-Boothe and Kyle Walker-Peters are also expected to be involved at Wembley.

Serge Aurier could come in to make another start at right-back while Fernando Llorente is primed to make his full debut with Harry Kane given a rest.

Dele Alli could start as he’s still got two more games left to serve on his three-game European suspension but Danny Rose and Victor Wanyama are both still out with knee injuries.

As for Barnsley, they will hand a late fitness test to Ryan Hedges after he picked up a knee injury during Saturday’s defeat to Aston Villa while Lloyd Isgrove and Andy Yiadom are both still out. 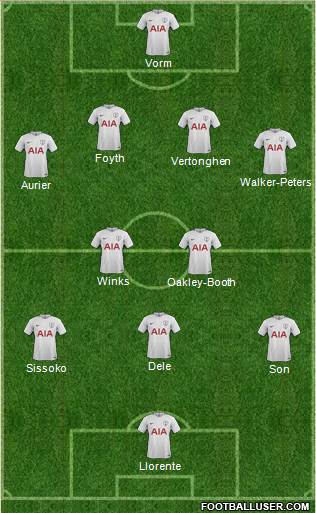 Tottenham 2-0 Barnsley: Despite making several changes, Spurs are still able to field a strong team and they shouldn’t have too many problems seeing-off a Barnsley side that sit 20th in the Championship table. Llorente will be desperate to get off the mark for his new club so I wouldn’t be surprised to see him score in a 2-0 victory.