Man Utd will be looking to close the gap with a win over Newcastle at Old Trafford on Saturday. Here is the team I think Jose Mourinho will pick for the game:

Manchester United will be looking to close the gap on leaders Manchester City with a win over Newcastle United at Old Trafford on Saturday evening.

Goalkeeper: David De Gea is one of the first names on Mourinho’s team sheet so the Spanish international is certain to keep his place between the sticks this weekend.

Defence: The United boss went with a 3-4-1-2 formation against Chelsea before the international break but I think we’ll see Mourinho go back to a flat four against Newcastle at home.

Phil Jones has been ruled out after aggravating a thigh injury during England’s 0-0 draw with Germany on Friday night so he’ll make way with Chris Smalling keeping his place alongside Eric Bailly.

Antonio Valencia should once again skipper the side at right-back while Matteo Darmian could be recalled on the left with Ashley Young given a breather.

Midfield: Paul Pogba could make his long-awaited return to the squad after finally recovering from a hamstring strain that’s kept him on the sidelines for over two months.

The French international has been in full training this week but Mourinho may not risk him from the start so Pogba could be eased back in to action from the bench.

Nemanja Matic will once again anchor the midfield with Ander Herrera favourite to keep his place ahead of Marouane Fellaini – who’s likely to start among the substitutes – while Michael Carrick may not be fit enough to make the squad just yet.

Attack: There are reports circulating that Zlatan Ibrahimovic could be back in the squad this weekend after making a swift recovery from a serious knee ligament injury.

The Mirror claim Ibrahimovic is pushing to be on the bench on Saturday after returning to full training so he could be an option in the second half if Mourinho decides to risk him.

Romelu Lukaku will be looking to break his goal-scoring duck as he leads the line up front with Marcus Rashford preferred to Anthony Martial on the wing.

Henrikh Mkhitaryan should once again start in attack while Juan Mata could get a recall after missing out at Chelsea – although Jesse Lingard is another option for Mourinho. 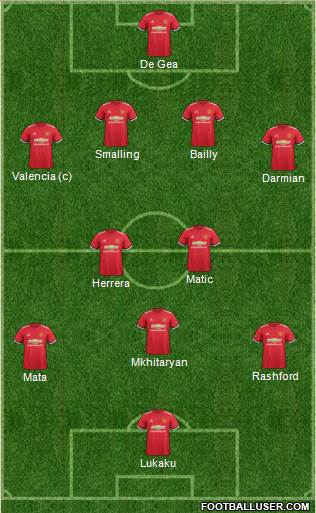