Liverpool take on Swansea City at Anfield on Boxing Day. Here is the side I think Jurgen Klopp will select for the game:

Liverpool will look to cement their position in the top four with a positive result when they take on Swansea City at Anfield on Boxing Day.

Goalkeeper: Simon Mignolet came under fresh criticism following his display during the 3-3 draw with Arsenal on Friday night but Klopp has stuck by the Belgian international in the past and I think he’ll start him again on Tuesday.

Defence: Joel Matip is back in training after recovering from a thigh injury and could return to the squad. If Klopp feels Matip is ready to start then he could line-up alongside Dejan Lovren otherwise Ragnar Klavan will keep his place.

Joe Gomez fell asleep for Arsenal’s first goal at the Emirates so Trent Alexander-Arnold could come in at right-back while Andrew Robertson should continue on the opposite flank in place of the injured Alberto Moreno.

Midfield: Jordan Henderson has been ruled out after picking up a hamstring injury against the Gunners. James Milner replaced him on Friday but Gini Wijnaldum could get a recall to start along with Emre Can in midfield.

Alex Oxlade-Chamberlain was perhaps unfortunate not to keep his place last time out so he could come back in to the midfield with Philippe Coutinho moving in to a more advanced role.

Adam Lallana is back in contention after recovering from a thigh injury but he didn’t get off the bench at the Emirates so the midfielder will be hoping to make an appearance against Swansea.

Attack: Attack wasn’t the problem against Arsenal as Liverpool scored three goals and created a hat-full of chances so Klopp doesn’t need to change things up top too much.

I think we might see Sadio Mane drop to the bench with Coutinho moving out to the left wing while Mohamed Salah will keep his place on the right side of the attack.

Daniel Sturridge could be back in contention if he recovers from illness while Dominic Solanke is another option for Klopp but Roberto Firmino should once again lead the line up front after getting himself on the score-sheet against the Gunners. 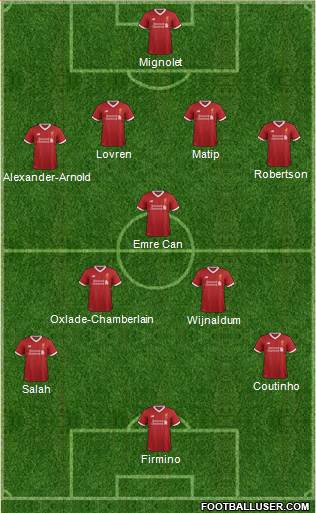