Tottenham welcome Fulham to Wembley on Saturday afternoon. Here is the side we think Mauricio Pochettino will select for the game:

Tottenham play their first ‘home’ game of the new Premier League season when they welcome Fulham to Wembley on Saturday afternoon. Here is the side we think Mauricio Pochettino will select for the game:

Goalkeeper: Hugo Lloris is almost certain to keep his place between the sticks this weekend so Michel Vorm will have to make do with a place on the bench once again.

Defence: Toby Alderweireld is still at the club despite speculation continuing to link him with a move away from north London but the Belgian international is unlikely to start this weekend as Davinson Sanchez should keep his place alongside Jan Vertonghen in the back four.

Midfield: Victor Wanyama is back in light training as he continues to work his way back from a serious knee injury but the Kenyan international is not in contention just yet. Harry Winks is back in full training after recovering from his own knee problem but a place on the bench is the best he can hope for.

Moussa Sissoko started during the win at St James’ Park on the opening weekend but he could make way for Mousa Dembele with the Belgian international lining-up alongside Eric Dier in the middle of the park.

Attack: Harry Kane came through the Newcastle game without issue so the England international will continue to lead the line up front as he looks to end his August goal-scoring drought.

Erik Lamela returned to full training this week after missing the trip to the north-east last week with a minor muscle injury but he’ll probably have to make do with a place on the bench.

Hueng-min Son is unavailable as he’s away on international duty at the Asia Games so Lucas Moura could continue on the right side of the attack this weekend.

Dele Alli got himself on the scoresheet last week with a fine header so no doubt he’ll keep his place alongside Christian Eriksen in the Spurs attack. 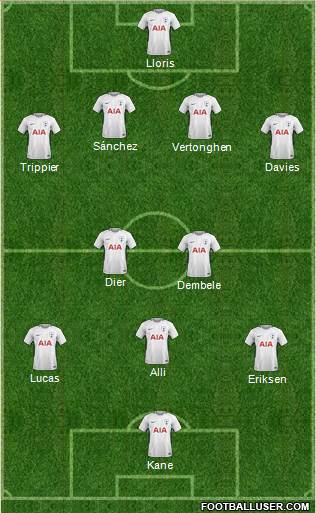