Liverpool take on Crystal Palace at Selhurst Park on Monday night. Here is the team we think Jurgen Klopp will select:

Liverpool will look to build on their impressive start to the season when they take on Crystal Palace at Selhurst Park on Monday night. Here is the team we think Jurgen Klopp will select:

Goalkeeper: Liverpool have finally resolved their goalkeeping problems after signing Alisson Becker this summer and the Brazilian international put-in an assured display during the 4-0 victory over West Ham last weekend. Alisson is certain to keep his place with Loris Karius once again on the bench.

Defence: Klopp has received a boost with the news that Joel Matip is back in the squad after building on his fitness in training last week after recently recovering from a hip injury that kept him out of the West Ham game.

However, Joe Gomez was excellent last week and the England youngster is expected to keep his place alongside Virgil van Dijk in the middle of defence so Matip will have to make-do with a place on the bench.

Klopp is unlikely to change his full-backs so Andrew Robertson and Trent Alexander-Arnold should once again start tomorrow night with Alberto Moreno and Nathaniel Clyne vying for places on the bench.

Midfield: Fabinho made his debut off the bench last week but the Brazilian international has built-up his fitness in training and is expected to be handed his full debut against Palace tomorrow.

James Milner could be the unfortunate man to make way while Jordan Henderson could also be recalled to the starting eleven with Georgino Wijnaldum dropping out despite putting in a fine performance last time out.

Summer signing Naby Keita made a hugely impressive debut against the Hammers so he should keep his place in midfield but obviously Alex Oxlade-Chamberlain is unavailable due to a long-term knee injury.

Attack: Mohamed Salah picked-up where he left off last season after scoring the opening goal against West Ham so the Egyptian international is expected to line-up in attack once again tomorrow night.

Sadio Mane is also expected to retain his place after scoring a brace at Anfield so Xhedran Shaqiri may have to make-do with a place among the substitutes against the Eagles.

Daniel Sturridge scored less than a minute after coming off the bench last weekend but I think Klopp will stick with Roberto Firmino up front so Sturridge will settle for a place among the subs. 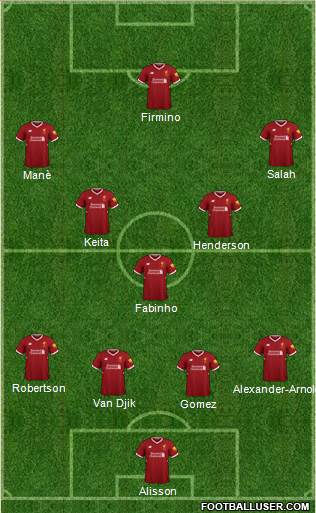