Liverpool take on Cardiff City at Anfield on Saturday afternoon looking to go top of the table. Here is the team we think Jurgen Klopp will select:

Liverpool will be looking to go top of the Premier League table with a win when they take on Cardiff City at Anfield on Saturday afternoon. Here is the team we think Jurgen Klopp will select:

Goalkeeper: We don’t need to deliberate too much over who will start in goal as Alisson is certain to keep his place over Simon Mignolet as long as the Brazilian international doesn’t pick up a late injury ahead of the game.

Defence: Klopp has gone with Dejan Lovren alongside Virgil van Dijk in the past two Premier League games with Joe Gomez at right-back. Gomez was back in the centre and was superb against Red Star Belgrade on Wednesday night while Trent Alexander-Arnold also impressed on the right.

However, I think Klopp may switch back to Gomez at right-back and Lovren in the middle with Alexander-Arnold making way. Andrew Robertson should once again start at left-back with Alberto Moreno having to make-do with a place on the bench.

Midfield: Naby Keita missed the comfortable Champions League win last night due to a hamstring injury. The midfielder is back in light training and will be assessed ahead of the Cardiff game but I don’t think Klopp will take any unnecessary risks. Jordan Henderson also missed the Red Star Belgrade game with a tight hamstring and Klopp suggested earlier this week the midfielder would also sit out the visit of Cardiff this weekend.

Fabinho impressed in the holding role last night so the Brazilian international could keep his place on Saturday afternoon while Xhedran Shaqiri will also be hoping he’s done enough to retain his place in a more central position after an excellent display against Red Star.

If both Keita and Henderson are ruled out then we could see James Milner coming back in to the midfield after being named on the bench on Wednesday night with Georginio Wijnaldum dropping out. Adam Lallana is now fully fit and will hope to feature but he may have to make do with a place among the subs.

Attack: Sadio Mane made a goal-scoring return to the Liverpool side against Red Star after recovering from a fractured finger and the Senegalese international should retain his place in attack on Saturday.

Mohamed Salah was back among the goals as he scored twice during the 4-0 Champions League win and the Egyptian international should once again start on the right wing.

Roberto Firmino lead the line up front last night and opened the scoring but Klopp may decide to give the South American a breather with Daniel Sturridge coming in. Sturridge has played his way back in to Klopp’s thoughts in recent weeks and started against Huddersfield last weekend so could be given another chance to impress against Cardiff. 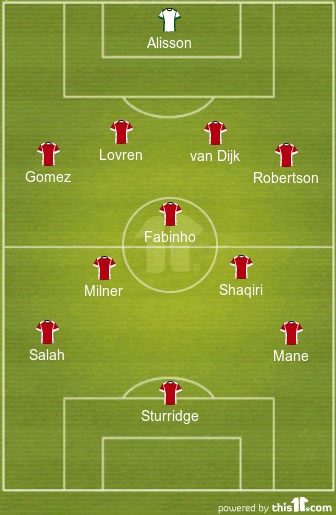