Chelsea take on Crystal Palace at Stamford Bridge on Sunday afternoon. Here is the side I think Maurizio Sarri will select for the game:

Chelsea will be looking to keep the pressure on the Premier League’s top two with a win over Crystal Palace at Stamford Bridge on Sunday afternoon. Here is the side I think Maurizio Sarri will select for the game:

Goalkeeper: Willy Caballero was given a rare run out during the Carabao Cup win over Derby County in midweek but Kepa Arrizabalaga is certain to be recalled between the sticks on Sunday following his rest on Wednesday night.

Defence: Sarri will make wholesale changes to his defence after resting his key men in the League Cup. Cesar Azpilicueta will come in for Davide Zappacosta at right-back while Marcos Alonso should be recalled at left-back with Emerson Palmeiri dropping out.

Gary Cahill and Andreas Christensen failed to impress during the 3-2 win over Derby so they will drop back to the bench on Sunday with David Luiz and Antonio Rudiger recalled to the middle of the back four.

Midfield: We should also see changes in midfield with Jorginho certain to be recalled in the deep lying playmaker role having been given a well-earned breather last time out. N’Golo Kante did play in the Carabao Cup but the Frenchman has exceptional fitness levels so no doubt he’ll keep his place this weekend.

Cesc Fabregas will make way despite scoring the winner against Derby while Ruben Loftus-Cheek should also drop to the bench once again, however, it will be interesting to see who Sarri opts for alongside Jorginho and Kante.

Mateo Kovacic has been the preferred name for much of the season but he played in midweek so Ross Barkley could be recalled in midfield after producing some impressive displays recently.

Attack: Eden Hazard has missed the last three matches with a back injury that he sustained against Manchester United last month but he returned to full training on Thursday. However, Sarri says the Belgian international isn’t ready to complete the full ninety minutes just yet so Hazard may have to make-do with a place on the bench on Sunday.

Pedro was back on the bench after recovering from illness in midweek but he could be recalled to the starting eleven if Hazard isn’t risked from the start while Willian may keep his place in the front three.

Olivier Giroud missed the League Cup win in midweek due to a muscle issue but the Frenchman is expected to recover to face Palace so I think we’ll see him leading the line up front with Alvaro Morata making way. 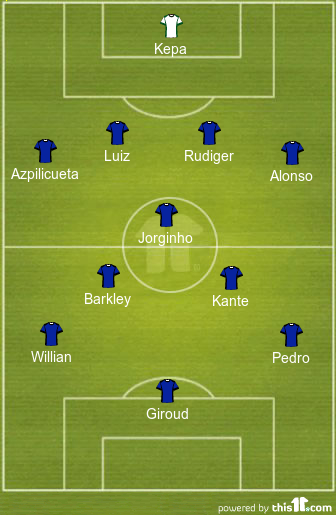