Tottenham need a positive result against Barcelona if they’re to progress in the Champions League. Here is the side we think Pochettino will select

Tottenham know they’ll probably need a positive result against Barcelona tonight if they’re to reach the knockout stages of the Champions League. Here is the side we think Mauricio Pochettino will select for the game:

Goalkeeper: Hugo Lloris is expected to retain the gloves at the Nou Camp this evening and Spurs will need the Frenchman to be on top form if they’re to shut-out the likes of Lionel Messi.

Defence: Tottenham have a huge problem at right-back as Kieran Trippier has been ruled out with an on-going groin injury while Serge Aurier limped off during the win over Leicester on Saturday night. Therefore, Pochettino is set to hand youngster Kyle Walker-Peters a rare start in defence.

Danny Rose could be recalled on the opposite flank with Ben Davies given a rest while we expect Toby Alderweireld to once again partner Jan Vertonghen in the middle of defence. Juan Foyth is ineligible in Europe so he couldn’t play even if he recovered from a hamstring injury while Davinson Sanchez is still on the sidelines.

Midfield: Moussa Sissoko seems to have played his way in to Pochettino’s starting eleven with some excellent performances in recent weeks so the Frenchman may once again line-up alongside Eric Dier in the middle of the park against Barcelona.

Mousa Dembele has once again been ruled out as he’s still nursing an ankle injury while Victor Wanyama is out with an on-going knee problem. Harry Winks will be an option for Spurs from the bench.

Attack: Harry Kane is certain to be recalled having been given a rare rest at the weekend and Tottenham will need their talisman to be in red hot form in front of goal if they’re to get a positive result at the Nou Camp.

Dele Alli is expected to keep his place in attack while Hueng-min Son could move out to the wing after a stint through the middle at the King Power Stadium on Saturday.

Christian Eriksen is expected to be recalled and the Danish international will either be deployed in a three-man midfield or in attack. I think Pochettino will go with a 4-2-3-1 to provide more width and protection to the full-backs.

Lucas Moura could be the man to make way while Erik Lamela may be back on the bench after overcoming a minor thigh problem that ruled him out of the Leicester game. 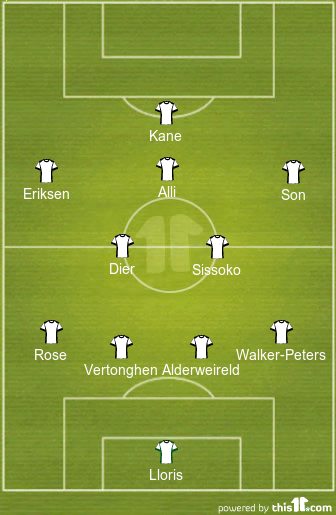