Tottenham take on Bournemouth at Wembley on Boxing Day. Here is the side we think Mauricio Pochettino will select for the game:

Tottenham will look to keep in touch with the top two when they take on Bournemouth at Wembley on Boxing Day. Here is the side we think Mauricio Pochettino will select for the game:

Goalkeeper: Hugo Lloris conceded two goals during Tottenham’s win at Everton on Sunday but the Frenchman is still expected to keep his place between the sticks against the Cherries so Paulo Gazzaniga will once again be named on the bench.

Defence: Pochettino is expected to freshen things up during the busy festive period so we could see changes in defence. Serge Aurier is back in full training after recovering from a groin injury so he could replace Kieran Trippier at right-back while Danny Rose should come in for Ben Davies on the left side of defence.

Davinson Sanchez made a successful return from injury on Sunday but Pochettino may feel a second game in four days might be too great a risk for the centre-back. Luckily, Juan Foyth is back in contention so the youngster may come in alongside Toby Alderweireld with Jan Vertonghen still nursing a hamstring injury.

Midfield: Tottenham have few options in the middle of the park as Victor Wanyama is still working his way back to full fitness from a knee injury. Mousa Dembele is in the final stages of his recovery from an ankle problem but the Bournemouth game may come too soon for the Belgian international.

Eric Dier isn’t due to return from having his appendix removed until the New Year so Pochettino may have no option but to stick with Harry Winks and Moussa Sissoko in midfield unless he wants to give youngster Oliver Skipp another chance to impress.

Attack: Tottenham’s forwards were all outstanding during the 6-2 thrashing of Everton so Pochettino will reluctantly make changes on Boxing Day but he knows it’s necessary with so many games coming up in quick succession.

Hueng-min Son was superb at Goodison Park but he may get a breather with Erik Lamela pushing for a recall in attack while Lucas Moura could also come in to give Christian Eriksen a well-earned rest after another excellent showing against Everton.

Dele Alli was once again on the score-sheet at the weekend but he may keep his place before being rested against Wolves on Saturday while Harry Kane should once again lead the line up front after bagging another two goals against the Toffees. 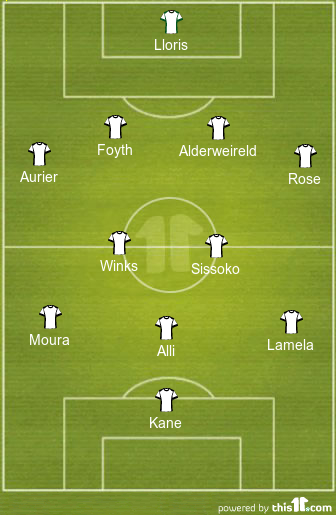