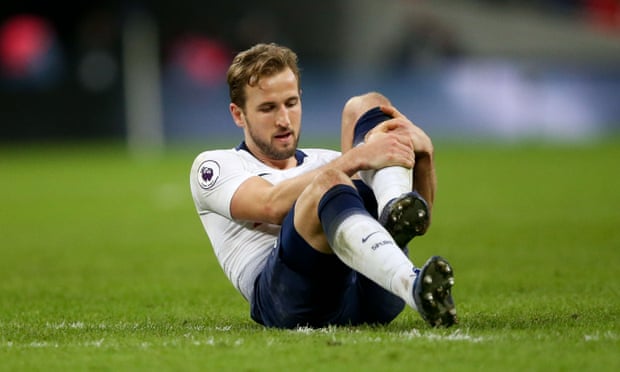 Tottenham star Harry Kane fears he’s set to be ruled out for at least a month after suffering an ankle injury during the defeat to Manchester United on Sunday, according to various reports.

Kane endured a frustrating afternoon at Wembley as he was thwarted on a number of occasions by the brilliance of David De Gea throughout the game as United dealt a major blow to Tottenham’s title hopes thanks to Marcus Rashford’s 44th minute winner.

Things went from bad to worse for Kane as he twisted his ankle during the closing stages of the match following a clash with Man Utd defender Victor Lindelof and needed treatment from the Spurs physios after the final whistle.

The 25-year-old looked in real discomfort as he limped down the tunnel and Mauricio Pochettino admitted after the game it would be a massive blow for the north Londoners if they were to lose Kane at this stage of the season.

Evening Standard journalist Dan Kilpatrick has now confirmed that Kane underwent his scan this morning and while Tottenham have yet to confirm the results, the striker fears he’s set to miss at least four weeks.

#thfc Kane scan on left ankle this morning. As others reported overnight, he fears at least 4 weeks out but Spurs will announce when they have the results.

The England international was barely able to walk as he left the pitch on Sunday and if his fears are realised and he’s suffered a grade two ankle sprain, then the hitman would be expected to miss between 4-6 weeks.

That would be a hammer blow to Tottenham as Kane would be ruled out of at least seven games including next week’s Carabao Cup semi-final second leg with Chelsea. Kane would also sit out Premier League games with Fulham, Watford, Newcastle and Leicester City as well as the FA Cup trip to Crystal Palace.

However, perhaps most worrying is the danger that Kane would miss the first leg of Tottenham’s Champions League last-16 clash with Borussia Dortmund – which takes place at Wembley on February 13th.

If Kane is ruled out for a month then he may target a possible Carabao Cup final on February 24th for his comeback, if they get past Chelsea, but if he’s out for any longer then he may be facing a race to be fit for the league games against Chelsea and Arsenal.

This is the third consecutive season that Kane has suffered an ankle injury and his absence would leave Pochettino short of options up front with Hueng-min Son off to the Asia Cup and Lucas Moura injured, so the Tottenham boss may be forced to call upon Fernando Llorente or Vincent Janssen over the coming weeks.