Chelsea welcome Tottenham to Stamford Bridge in the semi-final of Carabao Cup on Thursday. Here is the side I think Sarri will select for the game:

Chelsea will look to turn around a 1-0 deficit from the first leg as they welcome Tottenham to Stamford Bridge in the semi-final of the Carabao Cup on Thursday evening. Here is the side I think Maurizio Sarri will select for the game:

Goalkeeper: The Chelsea boss stuck with his number one in the first leg at Wembley so I think Kepa is certain to keep his place in goal with Willy Caballero once again having to make-do with a place on the bench.

Defence: However, we may see a change in defence with Andreas Christensen coming in. The Danish international played in the first leg so I wouldn’t be surprised to see him recalled against Spurs tomorrow. Antonio Rudiger could be the man to make way this time with David Luiz keeping his place in the middle of the back four.

Cesar Azpilicueta is expected to once again start at right-back and while question marks have been asked of Marcos Alonso in recent weeks, I still think he’ll keep his place ahead of Emerson Palmeiri at left-back.

Midfield: Chelsea are yet to bring in a replacement for Cesc Fabregas following his move to Monaco earlier this month so Jorginho is certain to keep his place in the deep-lying playmaker role while N’Golo Kante should once again start in the middle of the park.

However, we may see Sarri freshen things up in midfield with Ross Barkley pushing for a recall. The England international started against Tottenham in the first leg and I think he’ll be given the nod alongside Jorginho and Kante tomorrow with Mateo Kovacic dropping out.

Attack: Gonzalo Higuain hasn’t been registered in time to be available for selection against Tottenham on Thursday night so the Argentinean international will have to wait to make his Chelsea debut.

Eden Hazard has been deployed in the false 9 role up front in recent games and I think that trend will continue tomorrow night meaning Olivier Giroud will be used as an impact substitute once again.

Alvaro Morata is expected to miss out as he continues to be linked with a move back to Spain but we should see Pedro and Willian start in attack despite their disappointing performances against Arsenal.

Callum Hudson-Odoi will also be hoping to be involved at some point in the game but I think the youngster will have to settle for a place among the substitutes against Tottenham. 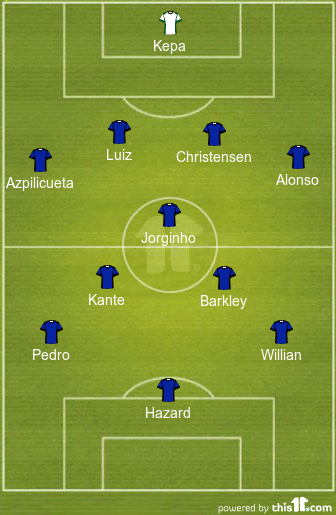