Liverpool take on Bayern Munich in their Champions League last-16 tie at Anfield on Tuesday night. Here is the team we think Jurgen Klopp will select:

Liverpool will be looking to secure a positive result in the first leg of their Champions League last-16 tie with Bayern Munich at Anfield on Tuesday night. Here is the team we think Jurgen Klopp will select:

Goalkeeper: I don’t think we need to debate too much over who will start in goal as Alisson Becker is certain to keep his place between the sticks with Simon Mignolet once again on the bench.

Defence: Liverpool have issues in defence as Virgil van Dijk will serve a one-match ban while Dejan Lovren is expected to be ruled out after failing to take part in training today. The Croatian was facing a late fitness test having not played in over five weeks due to a hamstring injury but it seems he’ll now miss out once again tomorrow night.

With Joe Gomez still working his way back to full fitness from a fractured leg it means Fabinho is expected to drop in to the defence to line-up alongside Joel Matip in the middle of the back four.

Andrew Robertson is set to retain his place at left-back but we should see Trent Alexander-Arnold return at right-back after recovering from a knee injury that’s kept him out in recent weeks.

Midfield: Liverpool have been handed a boost as Georginio Wijnaldum is available after recovering from illness so he should start in midfield while Jordan Henderson could be recalled after being named on the bench against Bournemouth last time out.

Naby Keita could keep his place ahead of James Milner so the Guinea international may line-up alongside Wijnaldum and Henderson in the Liverpool midfield tomorrow night.

Attack: Liverpool have a fresh fitness concern to worry about as Roberto Firmino missed training on Monday after being struck down with a virus. The Reds are hopeful he’ll recover to start against Bayern but Klopp will be praying for good news when Firmino reports to Melwood tomorrow.

Daniel Sturridge is on stand-by if the Brazilian international is ruled out while Xhedran Shaqiri is also an option for Klopp depending on how he’d want to line-up without Firmino.

Assuming the South American is fit, Mohamed Salah is likely to be deployed on the left side of attack with Sadio Mane starting in his usual position on the left. Adam Lallana and Divock Origi will therefore have to make do with a places on the bench. 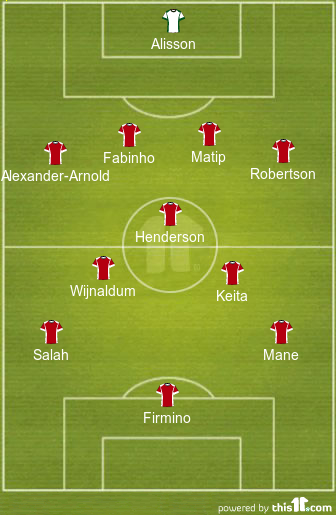