Tottenham take on Burnley at Turf Moor on Saturday lunchtime. Here is the side we think Mauricio Pochettino will select for the game:

Tottenham will look to keep the pressure on the top two with a win over Burnley at Turf Moor on Saturday lunchtime. Here is the side we think Mauricio Pochettino will select for the game:

Goalkeeper: There isn’t much to debate over who’ll start in goal as Hugo Lloris is almost certain to keep his place between the sticks meaning Paulo Gazzaniga will once again have to make-do with a place on the bench.

Defence: Tottenham played with a back three/five during the stunning Champions League victory over Borussia Dortmund last time out but I think Pochettino may revert to a flat back four this weekend.

Kieran Trippier should come in to replace Serge Aurier at right-back while Jan Vertonghen should move in to the middle of defence alongside Toby Alderweireld with Davinson Sanchez and Juan Foyth making way.

Midfield: Eric Dier is back in contention for Tottenham after missing the last two games with a virus so the England international could be recalled to line-up in a midfield three alongside Harry Winks and Moussa Sissoko.

Victor Wanyama is also an option for Pochettino but after so long on the sidelines with a knee injury, the Kenyan international is going to take some time to get back to his best so I think he’ll be on the bench along with Oliver Skipp on Saturday.

Attack: Harry Kane could return to the squad after making a swift recovery from an ankle ligament injury. The striker has been in full training this week but Pochettino says he will make a late decision over his involvement this weekend. Spurs have coped well in Kane’s absence so I don’t think they’ll rush him back to start at Burnley but a place on the bench is likely.

Heung-min Son has been outstanding in recent weeks so the South Korean could start up front if Kane isn’t risked with Fernando Llorente having to make-do with a place among the substitutes.

Dele Alli is still at least another week away from returning from a hamstring injury but Christian Eriksen should keep his place in the attack at Turf Moor tomorrow afternoon.

Erik Lamela is pushing for a recall but I think Lucas Moura will be given the nod to start alongside Eriksen and Son in the Tottenham attack against Burnley. 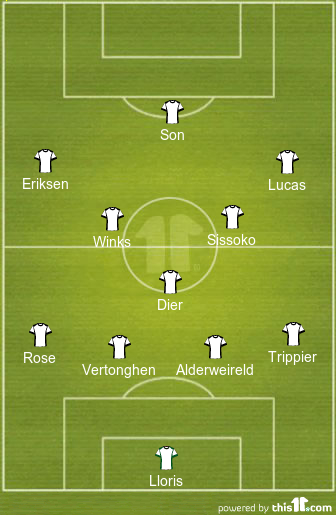