Manchester United entertain Watford at Old Trafford on Saturday afternoon. Here is the line-up I think Ole Gunnar Solskjaer will go with

Manchester United will look to boost their top four hopes with a win over Watford at Old Trafford on Saturday afternoon. Here is the line-up I think new permanent boss Ole Gunnar Solskjaer will go with…

Goalkeeper: David De Gea is set for a recall after being named on the bench for Man Utd’s FA Cup defeat at Wolves before the international break. Sergio Romero is therefore expected to drop out.

Defence: Man Utd will need to assess Luke Shaw as the left-back is a major doubt after he was forced to withdraw from the England squad through injury. Ashley Young is back from suspension so he could fill-in at left-back if Shaw misses out with Diego Dalot keeping his place at right-back.

Eric Bailly is a fitness doubt after suffering a head injury while away with the Ivory Coast but he should be available for selection this weekend. However, I expect Chris Smalling to keep his place alongside Victor Lindelof as they were forging an impressive partnership before the break.

Antonio Valencia made his playing return with Ecuador last week but I don’t see him being recalled by Solskjaer so the experienced full-back will vie for a place on the bench with the likes of Bailly and Phil Jones.

Midfield: Nemanja Matic was forced to withdraw from the Serbia squad due to an injury that he aggravated against Wolves but it’s not thought to be serious so he should keep his place in the holding role this weekend.

Ander Herrera made his return in the FA Cup clash earlier this month and he should keep his place in midfield alongside Paul Pogba so the likes of Scott McTominay and Fred will battle for a place on the bench.

Attack: Man Utd have several fitness concerns to worry about in attack. Romelu Lukaku is a doubt after missing Belgium’s Euro 2020 qualifiers due to a foot injury that also kept him out of United’s defeat to Wolves before the break. The striker will be given every opportunity to prove his fitness but it remains to be seen whether he’ll be passed fit.

Marcus Rashford will also be checked over after he withdrew from the England squad with an ankle injury but it’s not thought to be serious so Solskjaer will be hoping he’s available to lead the line up front against Watford.

Anthony Martial was forced out of the French squad due to an on-going knee concern so United won’t be taking any risks with him. I wouldn’t be surprised if Martial is only named on the bench at best so there will be a vacancy to fill in attack.

Alexis Sanchez is still out with a knee injury but Jesse Lingard made his return fro injury before the international break and he’s been able to build on his fitness over the past two weeks so he should keep his place in Solskjaer’s starting eleven.

Juan Mata also returned to the bench against Wolves after recovering from a hamstring injury so the Spaniard could be recalled to start alongside Lingard and Rashford in the Man Utd front three this weekend. 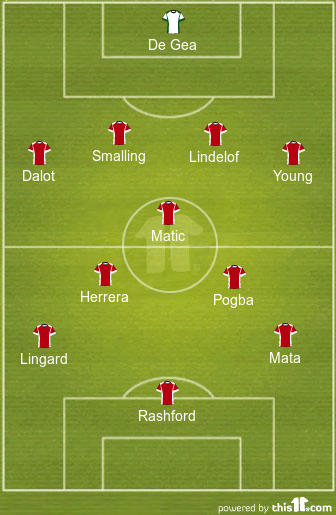