Manchester United take on Wolves at Molineux on Tuesday night. Here is the line-up I think new permanent boss Ole Gunnar Solskjaer will go with…

Manchester United will look to boost their top four hopes with a win over Wolverhampton Wanderers at Molineux on Tuesday night. Here is the line-up I think Ole Gunnar Solskjaer will go with…

Goalkeeper: I don’t think there can be too much debate over who will start in goal as David De Gea is certain to keep his place between the sticks with Sergio Romero once again on the bench.

Defence: Man Utd have been boosted by the news that Victor Lindelof is available for selection again after missing the win over Watford on Saturday due to unspecified personal issues. The Swedish international is likely to replace Phil Jones as Lindelof was forming a solid partnership alongside Chris Smalling before the international break.

Eric Bailly remains out with a head injury that he suffered while away with the Ivory Coast squad last week while Matteo Darmian and Antonio Valencia are still out so Ashley Young and Luke Shaw should keep their places in the full-back positions.

Midfield: Nemanja Matic came through the win over Watford unscathed after recovering from a minor knock that kept him out of action during the international break so I don’t think we’ll see too many changes in the Man Utd midfield.

The likes of Scott McTominay, Andreas Pereira and Fred are all options if Solskjaer want’s to freshen things up but I think Ander Herrera and Paul Pogba will keep their places alongside Matic in the middle of the park tomorrow night.

Attack: Man Utd have been boosted by the news that Romelu Lukaku is now fit to start after recovering from a foot injury. The striker missed Belgium’s games during the break and was an unused substitute against Watford at the weekend but Solskjaer says Lukaku is now pushing for a recall up front.

His return could see Marcus Rashford move out to the wing with Anthony Martial making way. The Frenchman scored at the weekend but he’s only just recovered from injury so Solskjaer may not want to push him too much by starting him for a second time in four days.

Jesse Lingard is available again after making his injury return at the weekend and he could replace Juan Mata in the Man Utd attack but Alexis Sanchez remains out with an on-going knee injury that’s kept him on the sidelines for the past month. 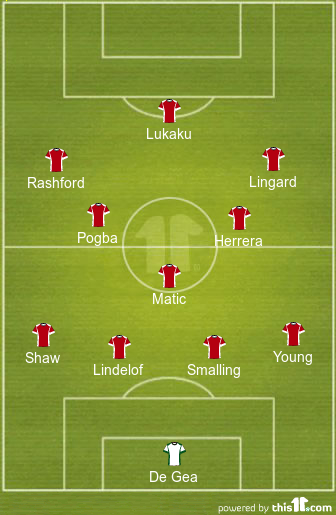