Manchester United will be looking for a win over West Ham at Old Trafford on Saturday. Here is the line-up I think Ole Gunnar Solskjaer will go with.

Manchester United will be looking to close-in on the top four with a win over West Ham at Old Trafford on Saturday evening. Here is the line-up I think Ole Gunnar Solskjaer will go with…

Goalkeeper: I don’t see any need to deliberate too much over who’ll start in goal as David De Gea is certain to keep his place. The Spaniard’s future at the club may be in doubt but he’s one of the first names on the team sheet.

Defence: Man Utd have problems in the full-back areas as both Luke Shaw and Ashley Young are suspended. Diogo Dalot should drop back into the right-back berth after playing further forward lately but it will be interesting to see who comes in at left-back. Solskjaer says Matteo Darmian could return to the squad but he might not be ready to play 90 minutes yet so Marcos Rojo may get the nod.

Eric Bailly is expected to miss out once again, Antonio Valencia is also unavailable but Phil Jones is pushing for a recall. However, I think we’ll see Chris Smalling alongside Victor Lindelof in the middle of the back four tomorrow evening.

Midfield: Man Utd will hand a late fitness test to Nemanja Matic as he’s been ill this week after missing the defeat to Barcelona on Wednesday night but Solskjaer says it’s unlikely the Serbian international will be available to start.

Ander Herrera is certain to miss out against West Ham as the Spaniard has been ruled out with a muscle problem that saw him miss the Champions League quarter final in midweek.

Scott McTominay was excellent against Barca last time out so he’s done enough to keep his place while Paul Pogba should also start once again in the middle of the park for Man Utd.

However, Solskjaer has hinted he’ll freshen things up ahead of the second leg at the Nou Camp next week so Juan Mata could be recalled in a more central role with Fred making way. Andreas Pereira is also an option for the United boss.

Attack: Marcus Rashford was passed fit to start against Barcelona after recovering from an ankle injury but Solskjaer may not want to risk him from the start tomorrow evening with the return leg in mind.

Therefore, Rashford may have to settle for a place on the bench against the Hammers with Romelu Lukaku leading the line up front on his own for Man Utd this weekend.

Anthony Martial is pushing for a recall so the Frenchman may line-up on the left side of attack with Jesse Lingard also expected to come-in after being named among the substitutes in midweek.

Alexis Sanchez is back in full training after recovering from a knee injury but Solskjaer has hinted the Chilean international may not be ready to face West Ham so a comeback against Barcelona next week is more likely. 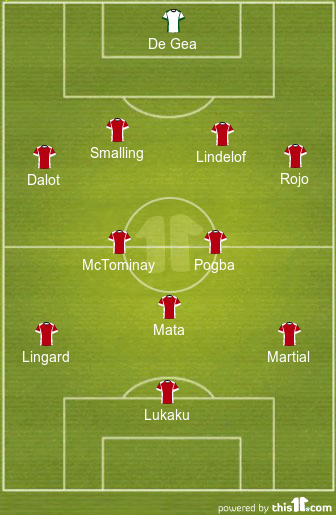