Arsenal take on Valencia in our Europa League semi-final first leg on Thursday night. Here is the side we think Unai Emery will select for the game:

Arsenal will be keen to secure a first leg advantage when they take on Valencia in our Europa League semi-final at the Emirates on Thursday night. Here is the side Gooner Mac thinks Unai Emery will select for the game:

Goalkeeper: Bernd Leno is Arsenal’s first choice goalkeeper in the Premier League but Emery has stuck with Petr Cech throughout the Europa League campaign so I expect the veteran Czech legend will be recalled tomorrow night.

Defence: Nacho Monreal is set for a recall after recovering from a minor calf injury that kept him out of the 3-0 defeat at Leicester City on Sunday afternoon. Monreal’s return could see Arsenal reverting to a back three/five with the Spaniard lining-up on the left side of the three centre-backs.

Laurent Koscielny is almost certain to be recalled after initially being named on the bench against Leicester. He came on after Ainsley Maitland-Niles was sent off and wasn’t at his best but I still expect the Frenchman to come in against Valencia. Sokratis should keep his place on the right side of the back three meaning that Shkodran Mustafi is the man most likely to make way.

Midfield: The switch in formation would see Sead Kolasinac move into the left wing-back role while Ainsley Maitland-Niles is expected to push in to a more familiar right wing-back position as his ban only applies in the Premier League.

Aaron Ramsey has confirmed he’s played his last game for Arsenal as he’s been ruled out for the rest of the season with a hamstring injury. Mohamed Elneny and Matteo Guendouzi are pushing for recalls but I think Emery will go with Lucas Torreira alongside Granit Xhaka tomorrow evening.

Attack: I think we’ll see a very similar side to the one that started in the home leg against Napoli in the quarter-finals which means Pierre-Emerick Aubameyang should once again be joined by Alexandre Lacazette up front.

Arsenal need to secure a first leg advantage at the Emirates as our away form is hopeless so I think Emery will go with both his strikers on Thursday night as we look to give ourselves a healthy lead ahead of the return leg in Spain.

Mesut Ozil missed the defeat at Leicester with a bruised foot but the German playmaker is back in contention after returning to full training. Ozil has been poor on the road this season but he’s saved most of his best form for our home games so I think he’ll start for this crucial match.

Henrikh Mkhitaryan would be a possible alternative but he was shocking at the weekend and Alex Iwobi is more suited to playing out wide rather than in a central attacking role so I think they’ll be on the bench with Ozil in the No.10 role.

Denis Suarez misses out once again as the Barcelona loanee has been ruled out for the rest of the season with a groin injury so Eddie Nketiah is likely to be on the bench. 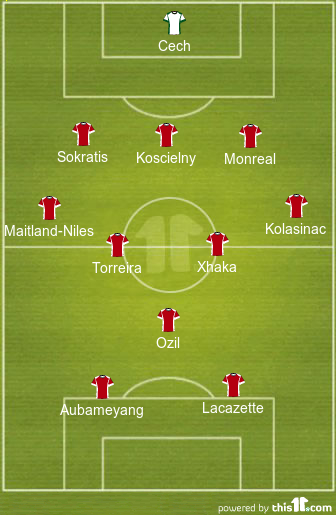