Liverpool welcome Newcastle United to Anfield on Saturday lunchtime. Here is the team we expect Jurgen Klopp to select for the game:

Premier League football returns this weekend as Liverpool welcome Newcastle United to Anfield on Saturday lunchtime. Here is the team we expect Jurgen Klopp to select for the game:

Goalkeeper: Alisson Becker is making good progress in his recovery from a calf injury but the Liverpool number one remains on the sidelines this weekend so Adrian will once again deputise between the sticks.

Defence: Trent Alexander-Arnold came through 90 minutes for England on Tuesday night unscathed so he should continue at right-back on Saturday while Andy Robertson will also retain his place on the opposite side of the Liverpool back four.

Joe Gomez is pushing for a recall after losing his place in Klopp’s starting eleven but Joel Matip has done well since coming into the side so I expect him to continue alongside Virgil van Dijk on Saturday.

Midfield: Liverpool could have Naby Keita back in contention as he bids to return from a groin injury but I doubt Klopp will throw him straight into his starting eleven so a place among the substitutes is probably the best he can hope for.

Fabinho has been excellent so far this campaign so he should keep his place in the holding role. He did make a substitute appearance for Brazil on Wednesday night and will need to be assessed upon his return to Melwood but I think Klopp will still select Fabinho from the start against Newcastle.

James Milner will be fresh after enjoying a break during the international period so I can see him being given a recall this weekend. Jordan Henderson could be the man given a rest following his exploits for England with Georginio Wijnaldum keeping his place.

Attack: Roberto Firmino started for Brazil during their friendly defeat to Peru last night and with the striker set to arrive back late to Melwood, Klopp may be tempted to put him on the bench this weekend.

Rhian Brewster is an option for Liverpool and the youngster would be desperate to impress if given the nod but I think it’s more likely that Mohamed Salah would be moved through the middle if Firmino is rested.

Sadio Mane should keep his place on the left side of the front three with Alex Oxlade-Chamberlain possibly coming in to start on the right in place of Salah. Xherdan Shaqiri and Divock Origi are other options but the Ox might get the nod. 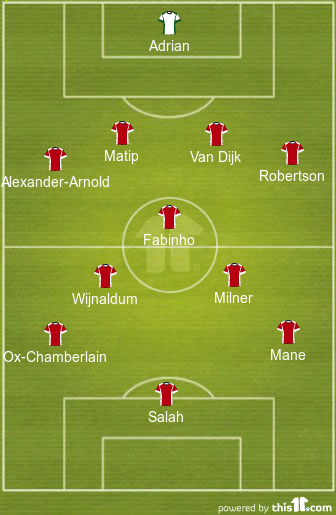