Tottenham take on Colchester in the Carabao Cup this evening. Here is the side we think Mauricio Pochettino will select for the game:

Tottenham will be looking to booking their place in the fourth round of the Carabao Cup when they take on Colchester this evening. Here is the side we think Mauricio Pochettino will select for the game:

Goalkeeper: Hugo Lloris missed the defeat at Leicester City due to his wife giving birth and he’s also set to sit out tonight’s game so Pablo Gazzaniga should keep his place between the sticks.

Defence: However, Pochettino is expected to make wholesale changes to the rest of the team that played at the weekend with Serge Aurier, Jan Vertonghen, Toby Alderweireld and Danny Rose all given a rest.

Ben Davies should be recalled at left-back with Kyle Walker-Peters coming in at right-back after recovering from injury. Juan Foyth is being tipped to make his long-awaited comeback from an ankle injury so he could start in the middle of defence while Davinson Sanchez should be back in contention after a knock.

Ryan Sessegnon is yet to feature for Tottenham since joining the club from Fulham on deadline day last month carrying a hamstring injury and he’s not expected to start tonight.

Midfield: We’ll see plenty of changes in the Tottenham midfield with Harry Winks, Tanguy Ndombele and Moussa Sissoko all gives a breather so Eric Dier should be recalled having fallen out of favour under Pochettino this season.

Victor Wanyama should also make a rare appearance after failing to secure a move away from north London in the summer while youngster Oliver Skipp is expected to be given a chance to impress.  However, Giovani Lo Celso remains out with a groin injury.

Attack: We should finally see Harry Kane given a well-earned rest as the England international has barely missed a minute of the season so far. Pochettino has hinted that he’s ready to give some of his youngsters a chance in the first team so Troy Parrott is being tipped to lead the line up front. The 17-year-old has impressed for the youth side so he’ll be desperate to make an impact this evening.

Christian Eriksen could be involved tonight after being a substitute at the weekend while Lucas Moura is another player pushing for a recall after being named on the bench against Leicester City. Erik Lamela and Heung-min Son will be the men to make way.

Dele Alli wasn’t involved in the Tottenham squad at the weekend so he could be recalled tonight but it seems Pochettino is easing him back into action following a niggling hamstring injury. 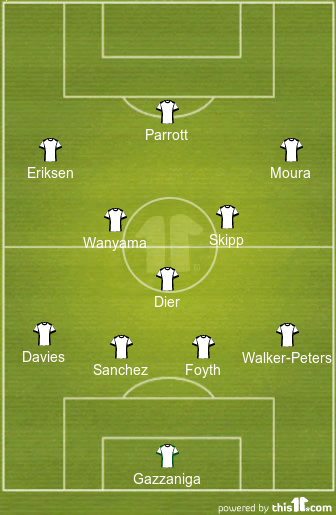