Liverpool take on the MK Dons in the third round of the Carabao Cup on Wednesday. Here is the team we expect Jurgen Klopp to select for the game:

Liverpool will be looking to avoid an upset when they take on the MK Dons in the third round of the Carabao Cup on Wednesday night. Here is the team we expect Jurgen Klopp to select for the game:

Goalkeeper: Alisson Becker continues to recover from a calf injury so Adrian is set to be rested ahead of Saturday’s Premier League clash with Sheffield United. Youngster Caoimhín Kelleher is therefore set to be handed his debut in goal.

Joe Gomez is almost certain to get a recall and he should be joined by Dejan Lovren in the middle of defence. Highly-rated teenager Ki-Jana Hoever should be given another chance to impress at right-back while 18-year-old Yasser Larouci could be an option at left-back. However, I think Klopp will want to have a bit more experience in defence so James Milner may be deployed at left-back.

Midfield: Naby Keita is back in contention after recovering from a troublesome groin injury that’s hampered him all season and the Guinea international is expected to start against the MK Dons.

Jordan Henderson and Gini Wijnaldum are likely to be given a breather along with Fabinho so we could see Adam Lallana starting in a deeper midfield position for Liverpool – which is something he’s been coached on in training in recent weeks.

Youngster Harvey Elliot is expected to be in the squad and Klopp could give him a taste of first team action in the League Cup this season.

Attack: Liverpool are unlikely to risk any of their key attackers so Mohamed Salah, Sadio Mane and Roberto Firmino should get a rest – although Klopp might be tempted to have one or two on the bench just in case.

Xherdan Shaqiri has been ruled out after suffering a calf injury in training while Divock Origi is also still recovering from an ankle injury that’s kept him out of the last two games so Liverpool don’t have too many senior options.

Therefore, Rhian Brewster is being tipped to make a start up front tomorrow after the highly-rated youngster was promised game-time by Klopp this season so he’ll be desperate to impress.

Alex Oxlade-Chamberlain is expected to start and he could be deployed out wide with youngster Curtis Jones given a chance in the first team having impressed in the U23s this season. 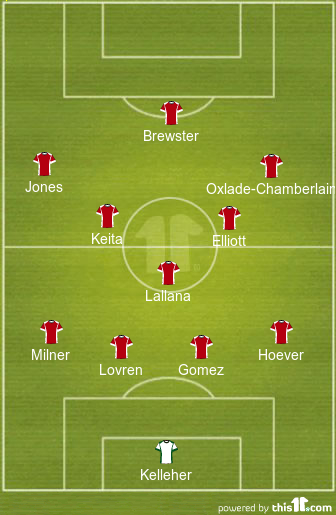