Man Utd take on Rochdale at Old Trafford in the third round of the Carabao Cup on Wednesday. Here is the team we think Ole Gunnar Solskjaer will select

Manchester United take on Rochdale at Old Trafford in the third round of the Carabao Cup on Wednesday night. Here is the team we think Ole Gunnar Solskjaer will select for the game:

Goalkeeper: Sergio Romero is expected to come back into the side as Solskjaer will give David De Gea another rest. Romero didn’t disappoint during the Europa League win over Astana last week so he’ll be hoping to keep another clean sheet tomorrow.

Defence: Man Utd are set to make wholesale changes in defence with Harry Maguire, Victor Lindelof, Aaron Wan-Bissaka and Ashley Young all expected to be given a breather by Solskjaer.

The United boss should switch to a back four similar to the one that was deployed in the Europa League so Diogo Dalot could come in at right-back, Marcos Rojo at left-back while Axel Tuanzebe is likely to be partnered by Phil Jones in the middle of defence.

Luke Shaw remains on the sidelines with a hamstring injury and is a major doubt for Man Utd’s Premier League clash with Arsenal on Monday night.

Midfield: Solskjaer confirmed to ManUtd.com earlier today that Paul Pogba is set to return to the squad after recovering from an ankle injury that’s hampered him in recent weeks. It’s unlikely he’ll start but Pogba could get a few minutes off the bench to get him ready for the Arsenal game.

Nemanja Matic has started the last two matches so he may get a rest meaning Scott McTominay could start in the deeper role tomorrow night. Fred is expected to be recalled after being unfortunate to lose his place during the defeat at West Ham as he was excellent against Astana last week.

Youngster Angel Gomes started in the Europa League tie and he is expected to be given another chance to impress tomorrow night. Teenager James Garner could also feature but I think a place on the bench is probably likely.

Attack: Anthony Martial remains out with a thigh problem while Marcus Rashford has been ruled out after suffering a groin issue during the loss at West Ham on Saturday. Rashford needs to be assessed before the full diagnosis is known but he’s certain to miss out tomorrow night.

Therefore, Mason Greenwood could start up front and the teenager will be hoping to build on his goal-scoring display against Astana having missed the West Ham game with a bout of tonsillitis.

Jesse Lingard was named on the bench for the last two games so I wouldn’t be surprised to see him come into the starting eleven while Tahith Chong may get another chance to impress after struggling against Astana last week. 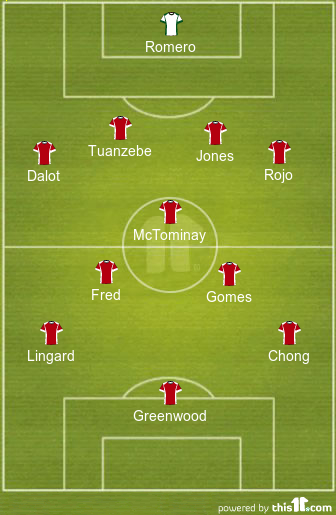