Arsenal take on Vitoria at the Emirates on Thursday night. Here is the side Gooner Mac thinks Unai Emery will select for the game:

Arsenal can take another step towards qualification to the knockout stages of the Europa League with a win over Vitoria at the Emirates on Thursday night. Here is the side Gooner Mac thinks Unai Emery will select for the game:

Goalkeeper: Emi Martinez is set for a recall with Bernd Leno dropping out. Martinez has impressed in the cup games so far this season so hopefully he can put in another solid display.

Defence: Emery was criticised for his selection in the back four during Arsenal’s defeat to Sheffield United on Monday night. Kieran Tierney, Hector Bellerin and Rob Holding were all left out of the starting eleven at Bramall Lane but the trio are expected to start tomorrow. Hopefully they can impress and convince Emery to start them in the league game against Crystal Palace on Sunday.

We should see David Luiz and Sokratis rested with Shkodran Mustafi coming in alongside Holding in the middle of the back four. Calum Chambers and Sead Kolasinac will also be given a breather.

Midfield: Arsenal will make wholesale changes in midfield with Granit Xhaka given a rest while Matteo Guendouzi is also expected to make way as he’s played a lot of football so far this season and we forget how young he still is.

Joe Willock failed to take his chance against Sheffield United so I expect he’ll make way with Lucas Torreira and Dani Ceballos getting recalls after being named on the bench on Monday. Emile Smith Rowe is also in-line for a recall after recovering from concussion.

Attack: Alexandre Lacazette is set to return to the starting eleven after making a cameo appearance off the bench against Sheffield United having recovered from an ankle injury that had kept him out for several weeks.

Pierre-Emerick Aubameyang will obviously be given a well-earned rest while I expect Bukayo Saka to make way with Gabriel Martinelli coming in to the side. The Brazilian teenager has been excellent when deployed through the middle but he’s also comfortable playing on the wing.

Nicolas Pepe put-in an improved performance last time out but I still expect Emery to give him a breather. Ainsley Maitland-Niles played on the right-wing in our win over Standard Liege so he may be given another chance in that role tomorrow as Reiss Nelson is out with a knee injury. 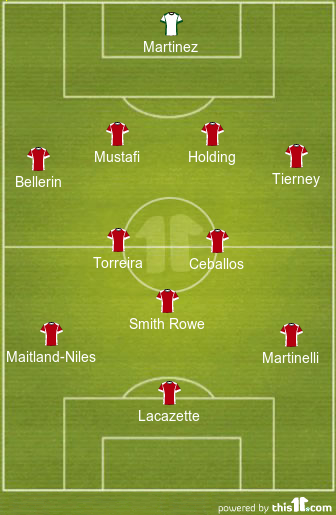