The draw for the quarter-finals of the Carabao Cup was conducted and the likes of Manchester United, Manchester City and Liverpool were all kept apart.

The draw for the quarter-finals of the Carabao Cup was conducted this morning and the likes of Manchester United, Manchester City and Liverpool were all kept apart.

Man Utd booked their place in the last eight of the competition thanks to an impressive 2-1 victory over Chelsea with Marcus Rashford scoring a stunning 30-yard free-kick to win it at Stamford Bridge on Wednesday night.

Ole Gunnar Solskjaer’s side have now been handed a favourable draw in the quarter-finals after being pitted against Colchester United. The League Two outfit will travel to Old Trafford after beating Crawley Town in the fourth round.

Liverpool enjoyed a 10-goal thriller with Arsenal at Anfield last night with the Premier League leaders coming from two-goals down twice to draw 5-5 and force penalties thanks to a stoppage-time equaliser from Divock Origi.

The Merseysiders won the shoot-out 5-4 to progress to the quarter-finals where they’ll now face a tricky trip to Aston Villa after the Villains booked their place in the next round after beating Wolves 2-1 at Villa Park on Wednesday night.

Manchester City eased into the last eight with a 3-1 victory over Southampton on Tuesday and Pep Guardiola’s men will now travel to Oxford United after the League One outfit beat Sunderland in the last-16.

The final quarter-final tie will see Everton entertain Leicester City at Goodison Park after they beat Watford and Burton Albion in the previous round.

The quarter-final games are due to be played on the week commencing the 17th December – although Villa vs Liverpool will have to be rescheduled due to the Merseysiders’ participation at the Club World Cup. 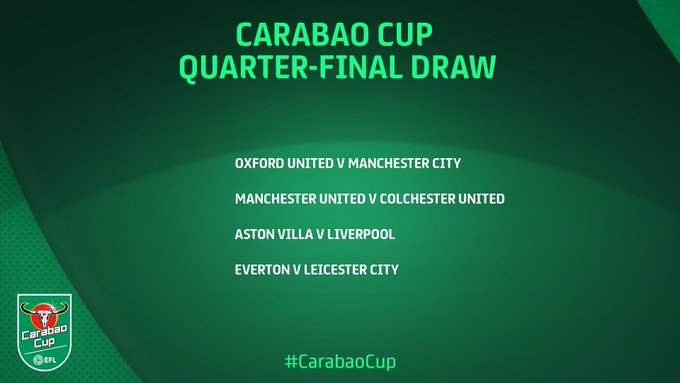