It may sometimes be hard to believe that in Paul Scholes’s 17 seasons in the Manchester United first team, he has amassed an amazing 10 Premier League titles, 2 Champions League trophies and won 3 FA Cups among many other awards. 675 appeara… 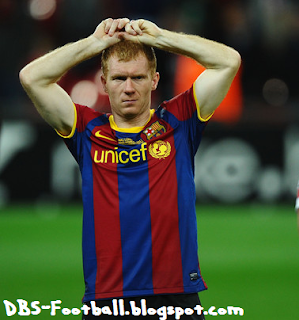 It may sometimes be hard to believe that in Paul Scholes’s 17 seasons in the Manchester United first team, he has amassed an amazing 10 Premier League titles, 2 Champions League trophies and won 3 FA Cups among many other awards. 675 appearances and 150 goals for one of the biggest and best clubs in the world is not bad going at all, and along with his stunning passing, sensational vision and intelligence on the field he has received countless plaudits. From team mates to footballing legends, Scholes really has attracted huge appreciation. Not that Scholes listens to it, in 2010 he said:

“I try to ignore the plaudits. It is nice for people to say positive things but I just put it to one side and concentrate on the next game.”

What a player he is. The mini clip above shows just a fraction of the maestros considerable talents and with his career unfortunately drawing to a close with retirement confirmed yesterday, I looked back on the players, managers and footballing legends who have heaped praised on this man’s shoulders.

“I have played with some great players during my time at United but I would have to put Paul Scholes down as the best.”

“Paul is always so in control and pin-point accurate with his passing—a beautiful player to watch.”

“There is no doubt for me that Paul Scholes is still in a class of his own.”

“He’s almost untouchable in what he does. I never tire of watching him play. You rarely come across the complete footballer, but Scholes is as close to it as you can get.”

“One of my regrets is that the opportunity to play alongside him never presented itself during my career.”

“When you play alongside him, you realise what a special talent he is. He is so intelligent and clever, he makes the game look really simple and showed it against Celtic by creating two goals.”

“Believe me, it is a pretty hard skill to be able to slot people through gaps when everything is going on around you. Paul can do that and I felt he was the big difference between the teams.”

“For me the best player, and every time we used to play against Manchester United, we always used to be scared of Paul Scholes. For me, he was the best I have seen in the Premiership in the middle of the park.”

“His vision, the way he sees the game, his goals ratio…a bit more now obviously, because we all, you know have to stop one day…but his goal ratio, his vision, he could put his foot in, whatever you wanted.”

“I’m also a big fan of Steven Gerrard but for me, Paul Scholes was amazing.”

“In the last 15 to 20 years the best central midfielder that I have seen — the most complete — is Scholes. I have spoken with Xabi Alonso about this many times. Scholes is a spectacular player who has everything.”

“He can play the final pass, he can score, he is strong, he never gets knocked off the ball and he doesn’t give possession away. If he had been Spanish then maybe he would have been valued more.”

“A role model. For me, and I really mean this, he’s the best central midfielder I’ve seen in the last 15, 20 years. He’s spectacular, he has it all, the last pass, goals, he’s strong, he doesn’t lose the ball, vision. If he’d been Spanish he might have been rated more highly. Players love him.”

“Paul Scholes would have been one of my first choices for putting together a great team — that is how highly I have always rated him.”

“An all-round midfielder with quality and character in abundance.”

“I tell anyone who asks me — Scholes is the best English player.”

“His reading of the game is unsurpassed. He has the best eye for a pass, for what the play or the game needs at that precise moment, that I have never seen anyone else have.”

“He controls and distributes the play and the game better than anyone I have ever seen.”

“He’s one of the great players to come through the ranks here.”

“Out of everyone at Manchester United, I would pick out Scholes – he is the best midfielder of his generation.”

“I would have loved to have played alongside him.”