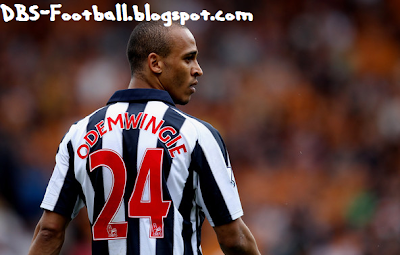 So Arsenal are planning a raid on mid-table dwellers West Brom for their star striker Peter Odemwingie with a bid of £4 million. It’s shocking, isn’t it? Arsene Wenger? Spending money?

I suppose he has no choice though, now that his Danish striker Nicklas Bendtner, who still believes he is one of the best strikers in the world, has decided that he will leave Arsenal this summer – he is 100% certain of it:

“I have decided 100% that I must leave Arsenal. I’ve considered this for a long time and was quite clear when I arrived at my decision.”

“It doesn’t feel particularly strange to not know what my future holds – I’m quite calm and confident that I’ll be fine at a new club.”

Odemwingie isn’t a bad player at all – 5th top scorer in the Premier League with 15 goals this season for West Brom as well as winning the player of the month award twice in both September and April. He is a top finisher and a natural goalscorer, scoring at all the clubs he has played for, though he has settled very quickly in England, equalling his highest goalscoring total for a season.

The £4 million valuation however, would not be well received by West Brom fans who would not like to see their star player go, especially when he is one of their best chances of staying in the Premier League next season. West Brom’s manager Roy Hodgson was not very enthusiastic about letting his top scorer go:

“Luckily they are under contract, so that’s not a great problem for us.”

“We are working very hard to make sure they are happy at the club, and we will do our very best to ensure that. We are a club with a very healthy economy. The chairman has a very clear idea of the direction that the club wants to go in. He is certainly more interested in retaining our players than selling them.”

“So players like Odemwingie and Brunt, who have long-term contracts, I expect them to stay at the club.”

Arsenal have needed a goalscoring striker for a while, with free agent last summer Marouane Chamakh not impressing with goals and Robin van Persie picking up several frustrating injuries which constantly stall and stutter his season. Odemwingie has twice penetrated Arsenal’s defence last season in his run of goals, and at 29 years of age, although not a typical Wenger signing would prove a very useful one.

Earlier in the season, the players agent David Omigie eluded to Odemwingie’s future being at the Hawthorns rather then elsewhere, with links to Juventus among other being rife at the time due to the Nigerians impressive form:

“West Brom haven’t told us about anything and Peter is really enjoying himself there and doing very well.”

“He will be happy staying there unless West Brom tell us otherwise.”

To get his man, Wenger will have to do something he has never been too fond of doing, and up his bid to prize Odemwingie away from West Brom, otherwise it will be another disappointing transfer window for Arsenal.