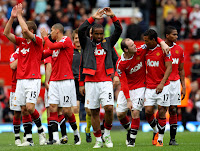 The saying, “April Showers brings May’s Flowers,” was quite fitting seeing as though Manchester United were able to finally bare the fruits of the long, enduring season.

There will be mixed feelings on how sweet the the fruits of the 2010/11 season taste, the Reds did no harm by winning the most coveted piece of silverware and finished runners-up in Europe.

United needed to weather a couple of storms to land the 2010/11 Barclays Premier League trophy, but they did it with class and sheer determination, but, unfortunately, the ship sailed on their fourth UEFA Champions League trophy.

Record wise, May was not a very good month, with the Reds only winning half of their six matches, but, domestically, they managed to get results at the right time to seal the most coveted prize of all. Their capture of this year’s trophy moved them to the top of the perch – uprooting their long-time, bitter rival, Liverpool.

Over the course of the month, the Reds scored 12 goals with none other than Anderson leading the charge with three goals to his name. The Brazilian midfield has never been known for his statistical presence in the squad, but he also chipped in with two assists, which was also tied for the team lead.

Even though the Anderson led the Reds in the two main offensive statistical categories, he was still outshone by one of his teammates for Player of the Month.

Wayne Rooney only scored two goals this month, but his burning desire to contribute to the club’s success was evident throughout the month. It was his calmness and confidence to take the all-important that would ultimately seal the destination of the Premier League. Rooney also scored a timely goal in the 2011 UEFA Champions League Final, which gave the Reds a tiniest bit of hope to overcome Barcelona, but it was his never-say-die attitude throughout that has earned him the plaudits.

One of the most disappointing aspects of the month was United’s inability to keep a clean sheet, which was the only time this has happened during the 2010/11 season. What makes it even more baffling, the Reds headed into the month on the heels of three straight shutouts, which totaled 308 minutes. However that streak ended 56 minutes later when United lost their opening match of May.

In the final edition of the North-South Derby of the season, Manchester United fell to Arsenal 1-0 to fling the door on Barclays Premier League race wide-open. Aaron Ramsey, who was thought to have secured a deal to Old Trafford before he signed for Arsenal, scored the decisive goal at the Emirates Stadium to give the Gunners all three precious points.

United triumphed 4-1 over Schalke 04 in the second leg of their UEFA Champions League Semifinal tie to secure a place in the final for the third time in four years. Antonio Valencia and Darron Gibson scored goals five minutes apart, but a goal from Jurado gave the visitors hope, however, two goals from Anderson in the second half saw the Reds run away 6-1 on aggregate.

With the entire football world glued to Old Trafford, United secured a fully-deserved 2-1 win over Chelsea to take an enormous step towards the Premier League title. Javier Hernandez scored just 36 seconds into the match, and Nemanja Vidic scored midway through the first half to give the Reds a commanding two-goal lead going into halftime, however, Frank Lampard cut their lead in half to set up a nervy ending, but the Reds held on for the win.

In the penultimate Premier League match of the season, Manchester United earned a 1-1 draw with Blackburn Rovers at Ewood Park to clinch this year’s trophy. Completely against the run of play, Brett Emerton hammered Rovers in front in the first half, but a correct decision awarded the Reds a penalty 17 minutes from time, which was smashed home with conviction by Rooney that gave them a share of the spoils.

In the final match of the 2010/11 Premier League season, United, quite fittingly, staged another come-from-behind victory as they beat Blackpool 4-2 at Old Trafford. Ji-Sung Park gave the Reds the lead, but two highly controversial goals converted by Charlie Adam and Gary Taylor Fletcher gave the Seasiders the unlikeliest of advantages, however, Anderson, who scored his first Premier League goal of the season, an unfortunate own goal by Ian Evatt and late finish by Michael Owen settled the scoreline.

In one of the most highly-anticipated European finals in years, Manchester United suffered a 3-1 defeat to Barcelona, who claimed the 2011 UEFA Champions League trophy, at Wembley Stadium. Pedro Rodriguez put Barcelona the lead on 27 minutes into the match, but Rooney drew United level just seven minutes after, however, two second half goals from Lionel Messi and David Villa gave the Spaniards the fully deserved victory.

Ultimately though, Manchester United are champions of England for a record 19th time, and that title is the one thing that we should remember above anything else that happened in the month of May.