Ashley Young and Phil Jones are already done deals for Manchester United, with the Spanish goalkeeper David de Gea soon to follow now that his successful European Under-21 campaign is over. But will anyone else follow them through the Old Trafford … 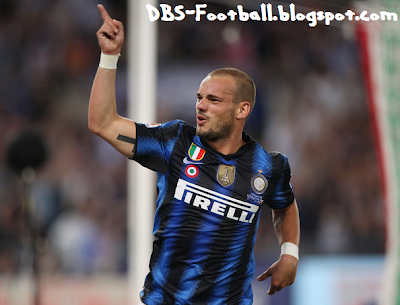 Ashley Young and Phil Jones are already done deals for Manchester United, with the Spanish goalkeeper David de Gea soon to follow, but will anyone else follow them through the Old Trafford doors to be welcomed by a warm handshake from Sir Alex Ferguson?

A central midfielder is expected from the fans, and United’s interest in several players in that position has been well documented, Wesley Sneijder included, and it has emerged today that there is only one real stumbling block – and it isn’t the £35 million asking price.

No, Manchester United have the money in the bank to afford such a signing, and are prepared to splash the cash to replace Paul Scholes. £35 million for the 27 year-old Dutchman is certainly expensive, and would be United’s record signing above Dimitar Berbatov, but Sir Alex Ferguson would be willing to spend that amount on the Inter Milan star, who has proven himself at the very top level in Italy, in Europe and at the World Cup. Sir Alex is a known fan.

The problem here though, is Sneijder’s demands of £200,000 per week – £30,000 more than he earns with Inter. Another slight problem is that United are not the only club interest, because their Manchester rivals City are, and would have no problems in paying those wages. Sneijder is said to prefer a move to United though, so if there was a straight choice for the attacking midfielder, United would surely be the winner, even if the wages offered were slightly lower.

Manchester United’s current top earner is Wayne Rooney – his highly publicised contract saga ending with him receiving a contract worth £180,000 a week plus another £90,000 for image rights, equalling £250,000 a week. United are clearly willing to spend big on their most important and most valuable players, and Sneijder would certainly be classed as an important an valuable player if he were to join United.

Ashley Young will be receiving around £130,000 a week when he starts playing for United which raised a few eyebrows among United fans who weren’t expecting a signing who plays on the wing. Sir Alex has his reasons, and Young is added to the United wage bill which stands at £132 million a year, but will Sneijder?

There has been a huge rise in footballers wages ever since 1961, when the Football League decided to abolish the wage cap, allowing the then England captain Johnny Haynes become the first £100 a-week player. Clubs have since tried to maintain their own club wage caps, but very few last in modern football, with the biggest and best players demanding astronomical salaries, giving the players the ability to hold their clubs to ransom over a contract.

In 2000, 39 years after the wage cap was removed, Roy Keane became Manchester United’s top earner, on £52,000 a week and just four years later, he was on almost double that amount, with him being paid £100,000 per week. It has been a rapid growth, and with more and more investors willing to pay the money, wages will continue to grow – and continue to become a problem for prospective buying clubs such as United.

If United have made Sneijder their number one target it is true, £200,000 may be an issue, but United could pay that amount if it came to it. Of course, if a bid for Sneijder is accepted by Inter, it will be down to the player as to how much he will accept to leave for in wages. Other midfield targets could prove cheaper weekly, with Luka Modric currently earning £50,000 at Tottenham, Samir Nasri earning £80,000 a week at Arsenal and Bastien Schweinsteiger earning just under £100,000 at Bayern Munich.

This Paul Scholes replacement will come at a price, both in a transfer fee and in a weekly wage. Manchester United and Sir Alex Ferguson will be looking for value for money, and it is up to Sir Alex to decide of £200,000 a week and £35 million provides him with the value. What do you think?