After the emphatic 1-0 win over Manchester United in the FA Cup quarter finals which ensured Chelsea a place in the semi finals at Wembley against Manchester City, the Blues now turn their attention to their Europa League quarter final clash with Rubin Kazan.

Against United, a brilliant Demba Ba finish in the second half brought to an end a game that lacked finesse but it was a win nonetheless and a great win to savor. Chelsea have a lot to play for coming to the end of the season; as they are very much still in the FA Cup and Europa League, and are still fighting for a top four place in the Premier League.

With Chelsea playing six games in two weeks, it comes as a relief to see our side beat Manchester United and progress in the FA Cup; which Chelsea have been an integral part of for the last six seasons, but the Europa League is totally new place for everyone at Chelsea Football Club and its fans. Some might argue that a 2nd leg home game is always preferable but given the fixture pile up of late, perhaps having the first leg at home will work to our advantage.

With Chelsea competing on all three fronts and the games coming thick and fast, Benitez has to ensure that he rotates the squad and keeps them fit-and-fresh. We already lost Ashley Cole against Manchester United when he pulled up with a hamstring problem and will be out for at least two weeks.

Chelsea are unbeaten at the Bridge in our last 11 European fixtures, but against a side like Rubin Kazan nothing can be taken for granted as they themselves have not lost away from home in the competition so far this campaign.

Rafa Benitez has confirmed that Ashley Cole and Gary Cahill wont be part of the squad that takes on Rubin Kazan at Stamford Bridge. Cole is out for at least two weeks following his hamstring injury against Manchester United in the FA Cup quarter finals, while Cahill could be out for 14 days as well after picking up a knee injury during our win over West Ham. Striker Demba Ba is cup-tied and wont be part of the Europa League matches having already played for Newcastle in a previous round.

Rafa Benitez had this to say on the Europa League and Chelsea players:

“My priority is the top four and trying to win the next game, in the Europa League. The priority for us is to finish in the top four, we know that, but at a top side you have to win every competition.”

“I don’t think our squad is too big but, if we don’t have injuries, we’ll be fine – we have to manage the players we have, Ashley is out for at least two weeks, so, for us, that means 20 games.”

“Before the international break we played against United, Steaua Bucharest and West Ham, we were the best in the world. We lost against Southampton and we’re the worst in the world.”

“You have to have balance. We only had 48 hours between games and don’t have a long squad. We had to approach Southampton in a different way because of the players we had on the pitch.”

“These were skillful players with talent and ability. You cannot kill players by playing them two games in a row in that time. Sometimes, for you, a strong team is something different to what I pick.”

My starting line-up for this game will be 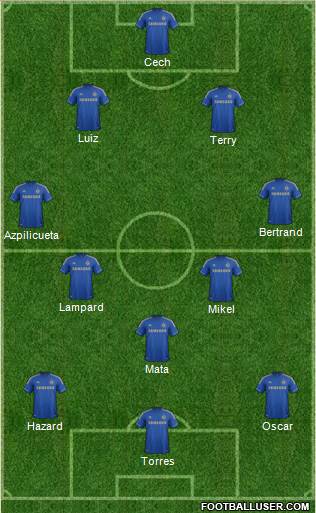 So get ready for some pulsating action at Stamford Bridge. Come on CHELSEA!!! KTBFFH.