With Theo Walcott cruelly being ruled out for the rest of the season with a serious knee injury, Gooner Daily looks at how Arsenal can cope without the winger.

With Theo Walcott cruelly being ruled out for the rest of the season with a serious knee injury, blogger Gooner Daily looks at how Arsenal can cope without the speedster over the coming months.

Injuries, they say, are part and parcel of the beautiful game but like a thief at night, it sneaks on you when you least expect it. Arsenal’s Theo Walcott has had his fair share of injury worries in the past with a dislocated shoulder being a big concern at the early part of his career with the club. He has also had some ankle and hamstring problems as well down the years.

When he managed to stay fit for the entirety of a season, he slammed in 21 goals and much was expected of him in the forthcoming campaign for both club and country. Walcott began the 2013/14 campaign at a rather slow pace in terms of his output in the final third, with his assist to Olivier Giroud in the North London Derby being his most telling contribution in the early part of the campaign.

He finally broke his goalscoring duck with a technically astute finish against Olympique Marseille but he suffered an abdominal injury in the build up to the home clash against Stoke and required a surgery to mitigate the problem.

With Olivier Giroud falling ill and Nicklas Bendtner suffering an injury to his ankle, Walcott was afforded a chance to start up front in the North London Derby against Tottenham on Saturday. His linkup play and movement was brilliant but his finishing was a bit wayward.

However, on the 81st minute after Arsene Wenger had made all his substitutions, Walcott jarred his knee fighting for a 50:50 ball. While he was stretched off, he trolled the Spurs fans by reminding them of the scoreline and they pelted coins at him, but the Arsenal fans responded by throwing red and white scarves at their hero while signing his songs. 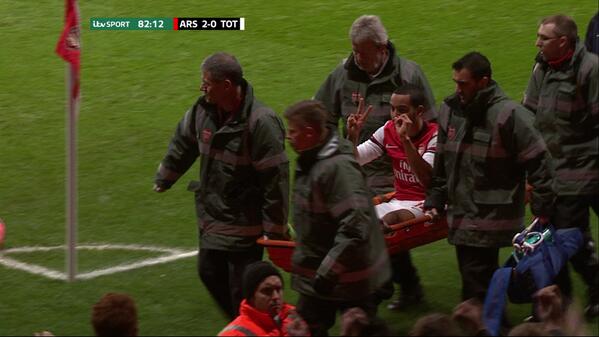 In his post-match press conference, Wenger wasn’t too sure about how bad the injury was, citing that it might just be a stretched ligament or just a kick, but after an extensive scan on Monday, the club regrettably announced that the speedster has sustained a ruptured anterior cruciate ligament of his left knee, which means that he’ll be out for at least six months.

If you do your calculations right, you don’t need any soothsayer to tell you that Walcott’s 2013/14 campaign for the Gunners is over and he’ll play no part in England’s quest for glory in the World Cup which is very painful. On the international scene, Sven-Goran Eriksson put him (as a 16-year-old) on the plane to Germany in 2006, Fabio Capello didn’t deem him good enough to join the party in 2010 and now, injury has robbed him of a chance to shine in the big stage this time.

By the time Russia would be hosting the World Cup in 2018, Walcott will be 29-years-old, which ultimately means that it would probably be his last World Cup.

I can’t stress much about the loss of Walcott in these upcoming crucial clashes without revealing his stats so far this season with some aid from WhoScored,

In the Premier League, Walcott was in a rich vein of goalscoring form with five goals in his last five games and with Nicklas Bendtner injured, he might have had more opportunities to play through the middle and potentially increase his scoring rate.

In the wake of Walcott’s loss, Arsene Wenger will have to count on the services of other players in the squad to do the job on the right wing, and there’s also the wildcard of going into the transfer market to get a new attacker in the mold of Walcott.

Arsenal has a vast array of personnel that can be deployed in Walcott’s right wing position and I can look no further than Santi Cazorla, Tomas Rosicky and even Jack Wilshere – attacking midfielders that can cut in-field from the position. If Wenger chooses a more direct approach, he can call on the services of Serge Gnabry and Alex Oxlade-Chamberlain that can supplement Walcott’s style of play in terms of pace, but they also bring their dribbling skills, raw power, strong shots and crossing ability to support the attack.

Even if Walcott seems to be covered on the right wing in terms of personnel that can take his place, questions are still raised whether his injury, coupled with Bendtner’s ankle injury, would force the manager’s hand to delve into the transfer market to sign a new forward.

Olivier Giroud is recovering from an illness and with a week’s rest, he’ll be odds on to return to the pitch against Aston Villa on Monday night. Beyond Giroud, Wenger can only summon the services of Lukas Podolski that hasn’t really impressed when he was deployed as a center forward. Podolski is another player with injury worries of his own, so can he be relied upon to stay fit for the remainder of the campaign?

It’s a big shame that the Gunners would miss a player of Walcott’s immense qualities because he offered Arsenal what no other winger in the team could – those raw reserves of blistering pace that they could use to exploit defenses.

I feel very sad for Walcott and I wish him a speedy recovery.

How do you think Arsenal can replace Walcott? Share your thoughts below.