Chelsea welcome FC Basel to Stamford Bridge on Thursday night looking to secure their place in the final of the Europa League. Here’s a preview for the game.

Chelsea welcome FC Basel to Stamford Bridge on Thursday night looking to secure their place in the final of the Europa League.

The Blues head into the semi final second leg holding a 2-1 aggregate lead following last weeks win in Swizerland, where David Luiz hit a last minute winner after the home side had cancelled out Victor Moses’s early header.

Despite Chelsea holding the advantage going into tonight’s game, Basel proved in the quarter final stages that they are a dangerous counter-attacking team when they scored four past Tottenham over the two legs, so Rafa Benitez knows his players must keep things tight at the back tonight.

Chelsea climbed back up to third in the Premier League table with a comfortable 2-0 win over Swansea on Sunday and have a vital trip to Old Trafford this weekend to worry about as they continue to push for a top-four finish this season.

However, Benitez will be trying to keep his players focussed on the job at hand and reach the Europa League final with a positive result this evening at the Bridge.

Benitez is expected to re-shuffle him pack once again as he continues to try and keep his squad fresh with Sunday’s crucial clash with United at the back of his mind.

He will be without defender Ashley Cole after he picked up a second yellow card in the first leg, so Ryan Bertrand is in line to fill in while Branislav Ivanovic also pushing for a recall having been left on the bench at the weekend.

Striker Demba Ba is once again ineligible having already played for Newcastle United in a previous round of the Europa League, so Fernando Torres will start up front.

Ramires suffered a dead leg against Swansea last time out and is also one booking away from missing the final so may not be risked. Frank Lampard may return to the starting line-up after coming off the bench to get on the score-sheet against the Swans on Sunday, and Yossi Benayoun may get a rare start.

Benitez has no fresh injury concerns meaning Oriol Romeu and Marko Marin are his only injury absentees, but David Luiz and John Obi Mikel are on yellow cards so will have to tread carefully if selected. 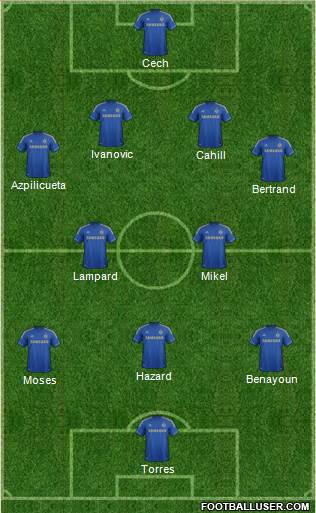 The Blues are in a commanding position having scored the two away goals last week. Basel know they have to score at least twice to have a chance of progressing and this should result in a reasonably open game, which should play into Chelsea’s hands and see their superior quality shine through. Chelsea 3-1 Basel

What would be your preferred starting eleven and whats your score prediction for the game? Share your views in the comments section below.