Tottenham Hotspur are in Georgia to take on Dinamo Tbilisi in the first leg of their Europa League play-off on Thursday evening. Here’s a preview for the game.

Tottenham Hotspur are in Georgia to take on Dinamo Tbilisi in the first leg of their Europa League play-off on Thursday evening.

Spurs narrowly missed out on Champions League football last season with Arsenal pipping them to fourth spot after Arsene Wenge’rs men put together a 10-game unbeaten run during the final weeks to consign their north London rivals to the Europa League once again.

Andre Villas-Boas men reached the quarter final stages of the competition last season only to crash out on penalties to Basel, but they will go into this years competition as one of the early favourites.

AVB has been busy in the transfer market this summer trying to build a squad capable of not only pushing for a top-four finish, but perhaps also make an unlikely title challenge. Brazilian attacker Willian is on the verge of joining the likes of Roberto Soldado, Paulinho, Nacer Chadli and Etienne Capoue in making the move to White Hart Lane, taking their spending towards the £100m mark.

Tottenham opened the new Premier League season with a narrow 1-0 win over Crystal Palace but are expected to rest a host of first team names tonight.

They face a tricky tie against the Georgian champions who will play at the 53,000-seater Dinamo Arena and coach Dusan Uhrin Jr will be hoping for a positive result to take back to the Lane next weekend.

Villas-Boas will once again be without star man Gareth Bale as the Welshman continues to nurse a convenient foot injury amid speculation he’s edging closer to making a world record move to Real Madrid.

Defender Jan Vertonghen has been left back in London with a minor ankle injury and he’s joined by Aaron Lennon who’s also carrying a slight foot problem. Sandro is making his way back to full fitness and played 67 minutes for the under-21’s on Monday, so won’t be involved today.

Midfielder Lewis Holtby is also out with a knee problem, while Benoit Assou-Ekotto and striker Emmanuel Adebayor are not included as doubts continue over their futures at the club.

Younes Kaboul is expected to get a start as he works his way back to full fitness after a year on the sidelines, and AVB should take the opportunity to use some of his youngsters and fringe players with the likes of Tom Carroll, Andros Townsend and Jermain Defoe all in-line to start. 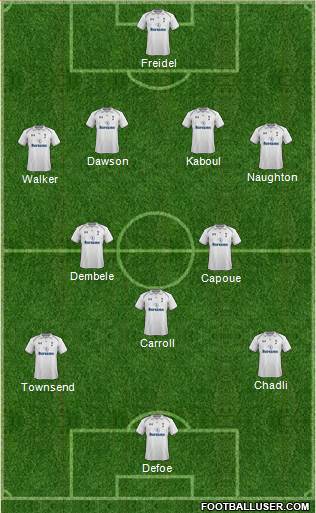 Tbilisi 0-2 Tottenham: It should be a relatively comfortable afternoon for Spurs.