Liverpool welcome Notts County to Anfield on Tuesday night in the second round of the Capital One Cup. Here is a preview with team news and predicted line-up.

Liverpool welcome Notts County to Anfield on Tuesday night in the second round of the Capital One Cup.

Boss Brendan Rodgers has already indicated he’s looking to make up for the mistakes he made last season, when he fielded severally weakened sides in both domestic cup competitions only to crash out to Swansea and Oldham in the League Cup and FA Cup respectively.

However, the Northern Irishman is expected to rest his key men with one eye on Manchester United’s visit to Anfield on Sunday. It’s likely the Reds will keep a strong spine to the side but hand opportunities so some of their fringe players as well.

Liverpool have no fresh injury worries heading into the game. Defenders Martin Skrtel and Sebastian Coates remain out with injury while striker Luis Suarez continues to serve his 10-match ban.

The likes of Philippe Coutinho, Steven Gerrard, Kolo Toure, Daniel Sturridge and Lucas Leiva are all expected to be given a breather.

Fabio Borini, Raheem Sterling, Joe Allen and Andre Wisdom could all start while Aly Cissokho is likely to make his full debut after coming on as a late substitute against Aston Villa at the weekend and he’ll be joined by fellow summer signing Luis Alberto who should start behind Iago Aspas in attack. 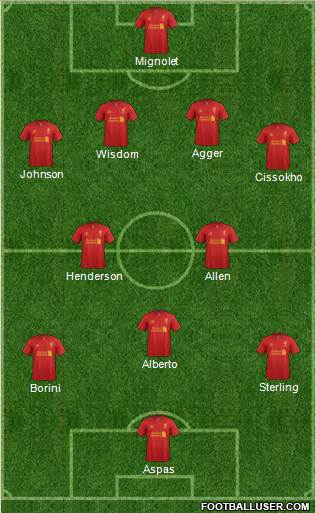 Liverpool 3-0 Notts County: Liverpool should have far too much for County to handle, despite the absence of first team regulars.