Chelsea welcome Manchester City to Stamford Bridge on Sunday afternoon with both sides looking to close the gap on league leaders Arsenal. Here’s a preview.

Chelsea welcome Manchester City to Stamford Bridge on Sunday afternoon with both sides looking to close the gap on league leaders Arsenal.

The Blues head into the game sitting five points behind league leaders Arsenal so will need a win to keep pace with the early pace setters.

Jose Mourinho’s men warmed up for the game with an impressive 3-0 win away at Schalke in the Champions League on Tuesday to boost their hopes of qualifying for the knockout stages.

That game followed a 4-1 win over Cardiff last weekend which saw Mourinho sent to the stands after a furious outburst at referee Anthony Taylor, but the Blues boss has escaped any touchline ban so will be in the dugout tomorrow.

City also recorded a victory in midweek with a hard fought 2-1 win over CSKA Moscow with Sergio Aguero continuing his fine form in front of goal with another brace.

It was City’s third win on the bounce and they sit fifth in the Premier League table following Everton’s win at Aston Villa, with Chelsea just a single point ahead in fourth, so it’s all to play for on Sunday.

Chelsea have been boosted with the news that defender Ashley Cole has been passed fit to play after recovering from a rib injury that’s kept him out for the last three weeks.

Cary Cahill was preferred to David Luiz in midweek after the Brazilian’s gaff against Cardiff last Saturday and may keep his place after an assured display alongside John Terry.

The big decision for Mourinho will be who to start up front with Fernando Torres the favourite following a brace against Schalke, although Samuel Eto’o will be hoping for a recall after opening his account last weekend.

Juan Mata is also hoping to start in attack and could come in for Andre Schurrle, but Marco van Ginkel will miss most of the season with a knee ligament injury.

The visitors have been dealt a huge blow with the news that captain Vincent Kompany has been ruled out of the trip to Stamford Bridge after failing to recover from a thigh strain.

Martin Demichelis remains out so Javi Garcia is expected to continue alongside Matja Nastasic in the centre of defence. Samir Nasri and Gael Clichy could be recalled after missing out against Moscow on Wednesday.

Boss Manuel Pellegrini has no fresh injury worries and Jack Rodwell has recovered from a hamstring injury so could be in the squad. 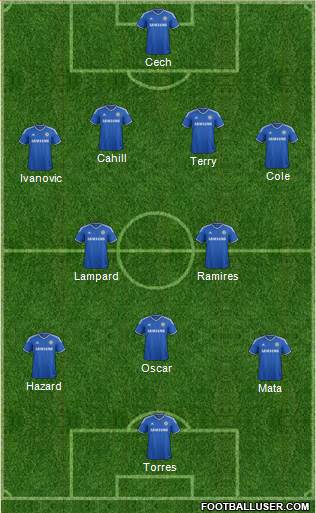 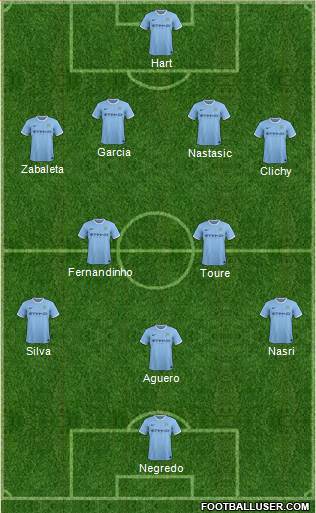 Eden Hazard: The Belgian international has been in fine form of late since returning from injury and we can see him being the key to this game.

Chelsea 1-1 Man City: Both sides are in decent form and we predict this heavyweight clash will end in a stalemate.