Tottenham take on Newcastle United at St James Park on Wednesday night looking to close in on the top four, and here is our predicted Spurs line-up for the game

Tottenham Hotspur travel to the north east to take on Newcastle United at St James Park on Wednesday night looking to close in on the top four, and here is our predicted Spurs line-up for the game.

Tim Sherwood is expected to stick with the majority of the side that beat Everton 1-0 on Sunday afternoon. The Spurs boss confirmed today that Vlad Chiriches is set for a spell on the sidelines after suffering a set back in his recovery from a back injury and with Younes Kaboul still lacking match fitness, it means Michael Dawson and Jan Vertonghen will continue at the back.

Mousa Dembele returned to the starting eleven at the weekend and came through the game unscathed so should retain his place alongside youngster Nabil Bentaleb in midfield, while Paulinho and Christian Eriksen are also expected to keep their places in the starting line-up.

Andros Townsend made a return to action from the bench against the Toffees and he could come in to make his first start in two months with Aaron Lennon likely to drop out. Emmanuel Adebayor is expected to keep his place ahead of Roberto Soldado after scoring a fine winner on Sunday, but Sandro and Gylfi Sigurdsson are still working their way back to full fitness.

Here’s the line-up Sherwood could go with: 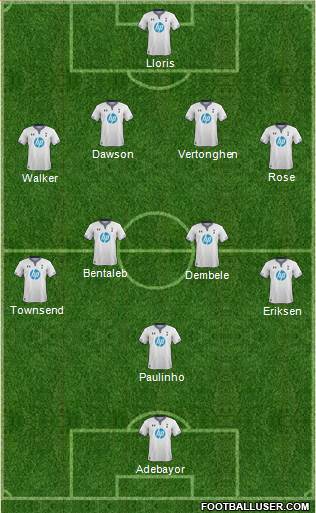 Spurs head into the midweek fixtures sitting three points adrift of fourth-placed Liverpool so will be desperate to pick up a win at Newcastle to keep the pressure on their top-four rivals as the race for Champions League qualification hots up.