Tottenham Hotspur welcome Dnipro to White Hart Lane this evening looking to turn around a one-goal deficit in their Europa League last-32 tie. Here’s a preview.

Tottenham Hotspur welcome Dnipro to White Hart Lane this evening looking to turn around a one-goal deficit in their Europa League last-32 tie.

Spurs cruised through the group stages of the competition, winning every game, before that run was halted as they slumped to a 1-0 defeat in Ukraine last week thanks to a penalty from Yevhen Konoplyanka.

However, the north Londoners should be confident they have enough to turn things around in tonight’s second leg and book a date with either PAOK or Benfica in the last 16.

Tim Sherwood’s men followed up the loss at Dnipro with another 1-0 defeat away at Norwich City on Sunday to leave them trailing fourth-placed Liverpool by six points, so Tottenham will be keen to get a morale-boosting win under their belt tonight.

Sherwood has confirmed that he will be without the services of Jermain Defoe meaning the striker has already played his final game for the club – although he will get to say his goodbyes to the fans at half time.

Midfielder Sandro is in-line to make his first appearance since mid-December after finally recovering from a troublesome calf injury, and the Brazilian could come in for youngster Nabil Bentaleb in midfield.

Kyle Walker is out with a hip problem to Kyle Naughton is expected to deputise at right-back, while Danny Rose is also still out with a knee problem meaning Zeki Fryers should start on the left.

Etienne Capoue is another who’ll miss the game after being forced off early on against Norwich with an ankle injury and he joins Younes Kaboul, Gylfi Sigurdsson, Erik Lamela and Vlad Chiriches on the sidelines.

Sherwood has already confirmed that Roberto Soldado will start the game, meaning Emmanuel Adebayor is likely to be rested unless the Spurs boss opts to play two up front. 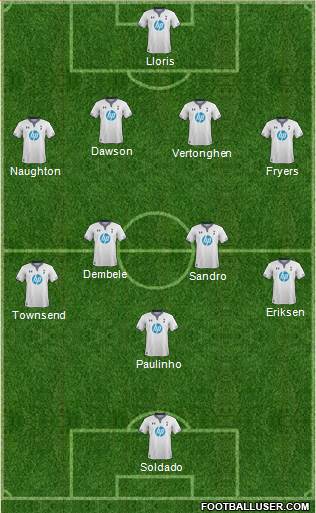 Roberto Soldado: Tottenham needs goals tonight so they’ll be looking to Soldado to find some form after some disappointing display’s in recent weeks. The Spaniard has looked low on confidence but this game should give him a good opportunity to get himself on among the goals.

Tottenham 2-0 Dnipro: Spurs weren’t at their best in the away leg but they had to endure some tough conditions and we can see them doing just enough to make their way through to the last 16.