Tottenham Hotspur will be looking to go one step closer to securing European football next season when they take on Stoke City at the Britannia Stadium on Saturday afternoon.

Spurs head into the game off the back of a two-match winning streak that’s seen them beat Fulham 3-1 last weekend and Sunderland 5-1 the previous week, with both victories coming at White Hart Lane.

The results leave Tim Sherwood’s side sitting sixth in the table and six points clear of Manchester United, although the Red Devils do hold a game in hand, so Spurs will be keen to pick up another three points to put them closer to securing a guaranteed place in the Europa League next year.

However, they will face a tough task against Stoke with Mark Hughes men losing just once in their last eight games, while Tottenham haven’t won away from home since January.

The impressive run has seen the Potters move up to 10th place in the table and well clear of the relegation zone, but Hughes has challenged his players to not rest on their laurels and push for the 50 point mark for the first time in the clubs history.

Stoke will be without defender Erik Pieters after he was forced off midway through last weeks 1-1 draw with Cardiff with illness. Marc Muniesa is expected to fill-in at left-back.

Robert Huth and Matthew Etherington remain on the sidelines, but on-loan winger Oussama Assaidi is pushing for a recall – although Hughes is expected to stick with the majority of the side that’s served him well in recent weeks.

Spurs welcome back skipper Michael Dawson after he recovered from a hamstring injury but the game is likely to come too soon for Jan Vertonghen as he’s only just returned to training following an ankle complaint.

Etienne Capoue is also back in training but he’s still well short of fitness after three months out with an ankle problem, while Mousa Dembele is expected to pass a late fitness test.

Kyle Walker and Erik Lamela are both still on the sidelines. 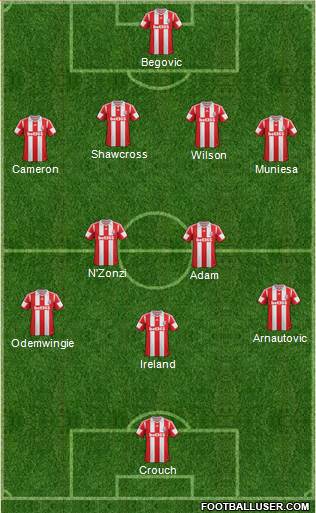 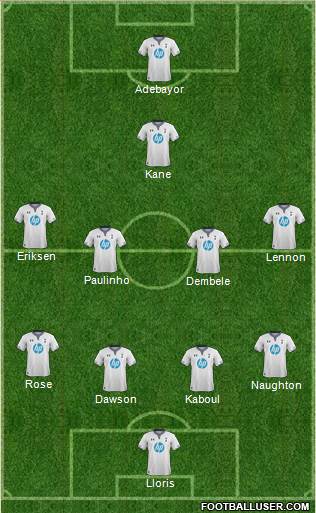 Christian Eriksen: The Dane has been in excellent form of late and chipped in with another two assists last weekend, so Spurs will be looking to him to give them a creative edge in the final third tomorrow.

Stoke 1-1 Spurs: The Britannia is never an easy place to go, particularly when Stoke are in fine form, so we think the two teams will play out a score draw this weekend.