Arsenal got back to winning ways in the Premier League with a comfortable 3-0 win over Aston Villa this afternoon. Here are Gooner Mac’s player ratings. 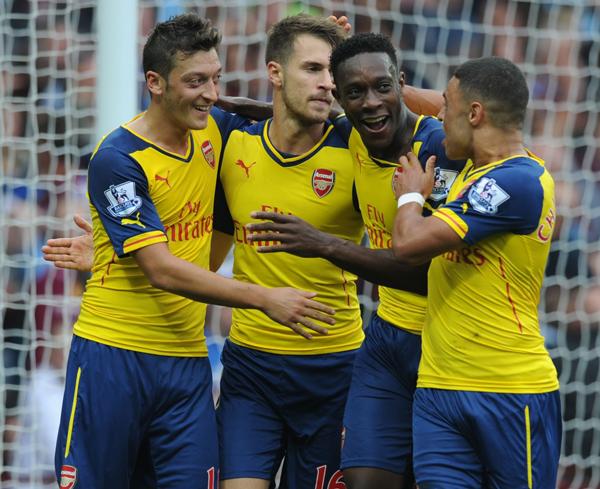 Arsenal got back to winning ways in the Premier League with a comfortable 3-0 win over Aston Villa this afternoon. Here are Gooner Mac’s player ratings.

It turned out to be a far easier game than many had expected as Mesut Ozil orchestrated a 3-0 win over Villa with all three goals coming inside 3 hectic first half minutes. Danny Welbeck set the German clear to slot home the first before Ozil then repaid the favour with a sublime assist for Danny’s first goal for the club. An own goal just seconds later made it 3-0 and we cruised through the rest of the game to secure our first three points since the opening weekend of the season.

Szczesny 7.5/10 | Made a superb save to deny Clarke with a free header shortly before we opened the scoring. It turned out to be a game-changing save. Very little to do afterwords.

Chambers 6.5/10 | Plenty of effort at right-back but he was perhaps lucky not to be sent off for a second bookable offence.

Koscielny 7/10 | Dealt well with the pace of Agbonlahor and made some timely interceptions.

Gibbs 7.5/10 | Excellent display by Gibbsy. He adds so much down the left as he doesn’t stop getting up and down the wing. His cross come shot was turned in by Cissokho for 3-0.

Arteta 6.5/10 | Better than Tuesday but still off the pace. Made a few rash tackles but kept possession okay.

Ramsey  5/10 | His poor form continues. His passing was terrible with one effort meant for Mertesacker going out for a corner!  Played a part in the second goal but generally a poor effort from Rambo.

Cazorla 7/10 | Good to have him back. His intricate play is so important to us.

Ozil 8.5/10 | Responded to his critics with a Man of the Match performance. Calm finish for the opener and a superb assist for the second. While his main position was in the middle, he drifted all over the pitch but he only gets that freedom when he’s played centrally. Its so important Wenger keeps his as a No.10.

Oxlade-Chamberlain 7/10 | In and out the game, but was dangerous when he did see the ball. Great block to deny Clarke in the second half.

Welbeck 8/10 | Lovely ball for the first goal and decisive finish for the second. He linked up wonderfully with Ozil which is encouraging to see.

Wilshere 6/10 | Involved in some decent play but booked for a rash tackle.

So we’re back to winning ways which was important after Tuesday’s debacle. Southampton up next in the cup before two crucial league games against Tottenham and Chelsea.