Tottenham will be hoping to avoid an upset when the entertain Brighton at White Hart Lane in the fourth round of the Capital One Cup tonight. Here’s a preview

Tottenham will be hoping to avoid an upset when the entertain Brighton at White Hart Lane in the fourth round of the Capital One Cup tonight.

Spurs head into the game off the back of a disappointing run of form having followed up last weeks 4-1 defeat to Manchester City by throwing away a one-goal lead to lose 2-1 to Newcastle United on Sunday.

The North Londoners needed late goals to secure a 3-1 win over Nottingham Forest in the third round of the COC so Mauricio Pochettino will be hoping to put together a morale-boosting run in the cup in a bid to turn around their season.

Tottenham are understandably the heavy favourites tonight as Brighton come to the capital in a poor run themselves having not won a league game since August and sit just two points above the relegation zone in the Championship following Saturday’s 1-1 draw with Rotherham, so under-fire boss Sami Hyypia will be desperate to get a much-needed win under his belt this evening.

Pochettino is expected to ring the changes and give some of his fringe players a chance to impress.

The likes of Younes Kaboul, Christian Eriksen, Emmanuel Adebayor, Hugo Lloris, Danny Rose and Etienne Capoue are all expected to be rested.

Michel Vorm, Ben Davies, Vlad Chiriches, Benjamin Stambouli, Aaron Lennon, Harry Kane and Roberto Soldado are among those who should come in. 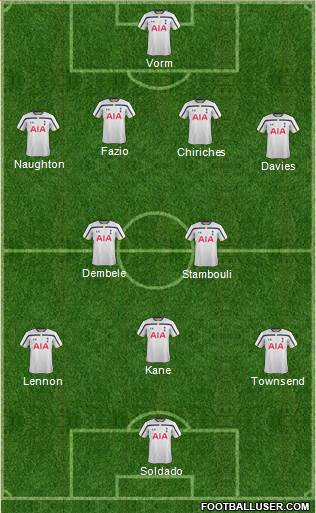 Harry Kane: The youngster showed his quality with a well taken hat-trick in the Europa League last week and he’ll be keen to impress again this evening. Kane has an eye for goal so the visitors will need to pay close attention to him.

Tottenham 3-1 Brighton: Despite making wholesale changes and struggling for form, I expect Spurs to have too much for Brighton this evening.