Louis van Gaal has confirmed a major injury boost ahead of Man Utd’s game against Crystal Palace while he’s also given an update on Radamel Falcao. 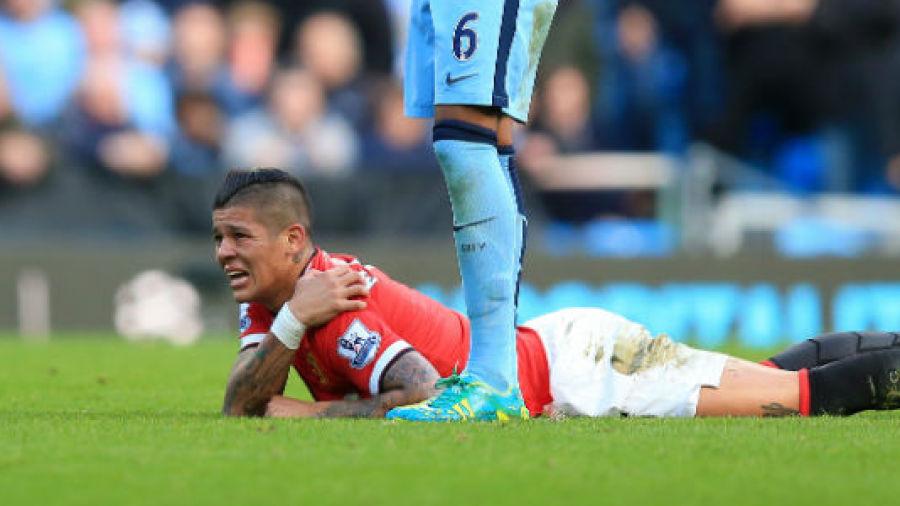 Manchester United will be looking to get back to winning ways when they entertain Crystal Palace at Old Trafford on Saturday afternoon.

Ahead of the game, Louis van Gaal has been speaking to the media at his pre-match press conference this afternoon and has given Manutd.com a team news and injury update.

The Dutchman has been handed a boost with the news that Marcos Rojo does not require surgery on a shoulder injury he picked up during last weeks 1-0 defeat to Manchester City.

The Argentine international was forced off at the Etihad after falling awkwardly on his left shoulder and there were fears he would need to go under the knife which would see him on the sidelines for up to three months.

However, van Gaal has confirmed the defender dislocated his shoulder in a ‘positive way’ meaning he could be back in less than six week. He told United’s website:

“Marcos dislocated his shoulder but did it in a positive way,”

“We don’t need to operate on him. It’s a relief but maybe, with this injury, it is very difficult to prevent it from happening again. That is the problem.

“He saw a specialist yesterday evening who said the conservative way to heal it is best. For him, it was positive. Always with these injuries, I cannot change that. The human body has been made by God – not by me. Conservatively, it can be less than six weeks. If we have to operate, 12 weeks.”

While it’s a boost that Rojo won’t be out for three months, he’s still going to be missing for tomorrow’s game and with Chris Smalling suspended following his sending off against City and Phil Jones and Jonny Evans still injured, van Gaal is left with problems in the center of his defence.

The long list of absentees means the United boss will have to pick two centre-backs from Michael Carrick, Paddy McNair, Tyler Blackett and Tom Thorpe to face Palace this weekend, but the Dutchman won’t reveal who will be playing just yet.

“When I want to select the same line-up, I cannot,” added van Gaal.

“It’s the same every week. It is like it is and I don’t want to complain or cry because I have great belief in the players, myself and my staff. Also the supporters who are supporting us despite the results.

“Smalling is suspended. Evans and Jones are still injured. So I have to solve a problem but I don’t want to say who is playing yet.”

ManUtd.com also confirmed that on-loan striker Radamel Falcao will once again miss out this weekend as he continues to nurse a calf injury that he picked up three weeks ago.

It’s another set-back in whats been a frustrating first three months at Old Trafford that’s seen the Colombian make just three starts with his only goal coming during a 2-1 win over Everton over a  month ago.