Arsene Wenger has given an injury update on Laurent Koscielny, Jack Wilshere, Theo Walcott, Danny Welbeck and Wojciech Szczesny ahead of the Dortmund game. 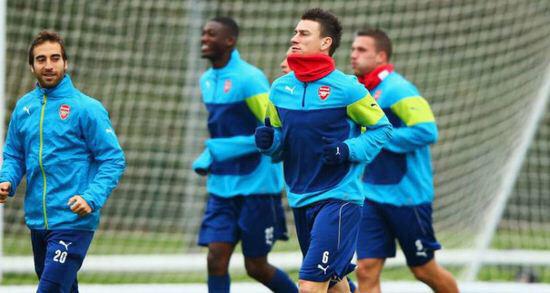 Arsenal will be looking to book their place in the knockout stages of the Champions League when we take on Borussia Dortmund tomorrow night.

Ahead of the game, Arsene Wenger has been speaking to the media at his pre-match press conference this afternoon and gave Arsenal.com a team news and injury update.

As we reported earlier, the boss confirmed that Laurent Koscielny has made a shock return to the squad after taking part in first team training this morning.

The Frenchman has been on the sidelines since early October after aggravating an Achilles injury while on international duty with France but he’s now back in contention against Dortmund tomorrow.

There was also good news on Danny Welbeck with Wenger confirming that the striker is in the squad despite missing training today due to a knee injury, but the boss hasn’t decided whether he’ll start him on Wednesday.

However, Theo Walcott remains on the sidelines with a groin injury that he picked up while away with the England squad and Wojciech Szczesny is also unavailable after suffering a hip injury against Man Utd on Saturday.

Jack Wilshere also picked up an ankle injury during the game at the Emirates and it looks like he’s facing another spell on the sidelines with Arsene revealing the midfielder has suffered a ‘big ankle sprain’. He refused to put an exact time-scale on Jack’s return but we should know more once he sees a specialist next week.

This is what Wenger told the clubs website today:

He’s in the squad for tomorrow. It’s very good news because he was out for a while now and we are short in numbers defensively. It’s good to have his quality back.

on Szczesny, Wilshere, Walcott and Welbeck…

Welbeck is in the squad but Wilshere is out, Walcott is out for the same groin problem he came back with from England and Szczesny is out as well.

on Danny Welbeck’s chances of starting…

I don’t know, I have not decided yet.

on the timescale for Wilshere’s injury…

He has a big ankle sprain and I don’t want to talk about it because I’m not a specialist medically. [To find out] for how long, we will need to see a specialist.

It’s a major boost to have Koscielny available again as he’s been sorely missed in recent weeks – although I do hope we’ve not rushed him back too soon as an act of desperation due to our problems at the back. There’s no point bringing the defender back too soon only for him to suffer a set-back and be out for even longer.

The situation surrounding Wilshere doesn’t appear too positive and I wouldn’t be surprised if he was ruled out until the New Year. It was a nasty challenge from Paddy NcNair, that somehow went unpunished, and now it looks like we’ll be without another important first team player for the foreseeable future.